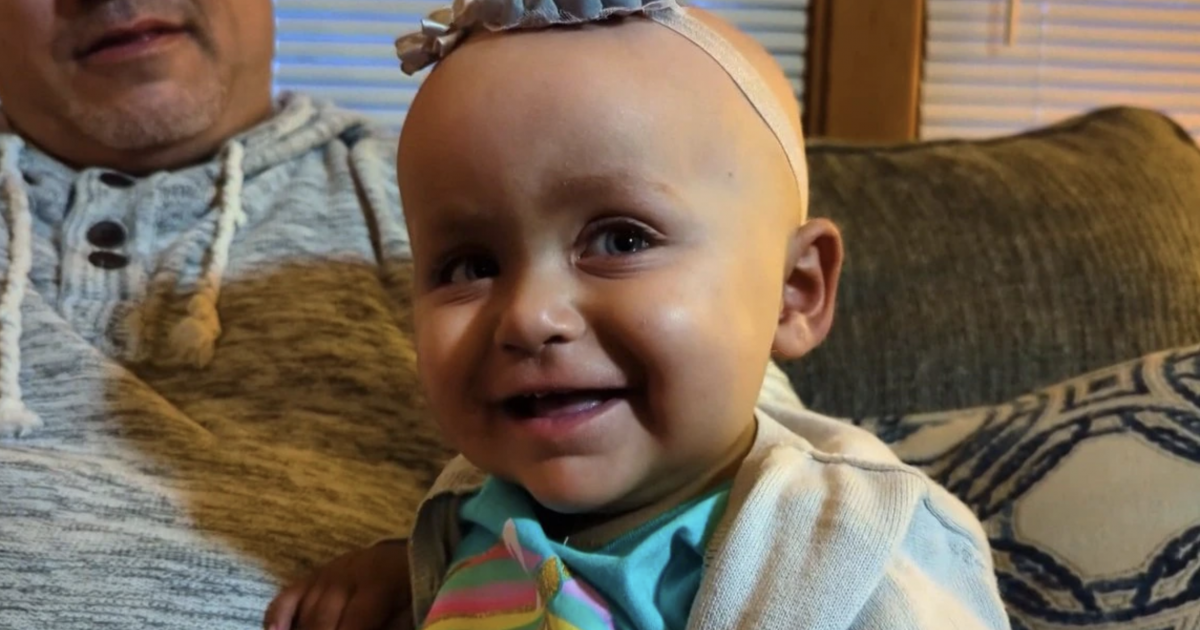 A childhood cancer diagnosis is never a welcome surprise. But the parents of a baby girl from Michigan are grateful for the unusual circumstances that led to their daughter’s diagnosis.

Jared and Mary Ritsema are the proud parents of fifteen-month-old Mariah Pearl. But their world was turned upside down when Mariah grew lethargic and sick around six months after she was born and visits to the pediatrician provided no answers.

Read More
“Our friend sent me a text and said, ‘Your formula’s been recalled’ and I said, ‘What?’” Mary recalled. Though a formula recall is not ideal news for a parent, Mary says it was “a blessing in disguise” because it pushed them to bring Mariah to the the emergency room. Once they were there, an ultrasound revealed Mariah’s cancer: stage four neuroblastoma. “It’s more aggressive. It’ll come back if you don’t go through the extensive treatments,” Mary said of her daughter’s disease.

Mariah’s course of treatments will last for about two years. So far, she’s had chemotherapy and bone marrow transplants.

“Six different pumps with medications going off every hour, or every half-hour there’s beeping,” Jared said of his baby’s cancer treatment.

Due to a birth complication, Mariah also needed brain surgery to address the fluid on her brain.

“They cauterized the main artery off in the brain,” Jared said of that operation. “She’s the second kid to ever have this surgery done at Helen DeVos (Children’s Hospital).”

RELATED: Why Do Pediatric Drugs Take So Long to Develop? A Look into the Lag Time on Drug Approvals for Childhood Cancer & Other Illnesses

Mary and Jared have struggled with the emotional and financial burdens of watching their precious daughter battle cancer, but they have also been amazed by how happy Mariah seems to be regardless of her harrowing health battles.

“We’re all here together and we’re in a room and it just makes her happy for all of us to be together and spending time together,” Mary said.

If you’d like to financially help the Ritsema family, check out their GoFundMe page here.

Neuroblastoma is a type of cancer that starts in certain very early forms of nerve cells, most often found in an embryo or fetus. In fact, neuroblastoma is “by far the most common cancer in infants (younger than 1 year old)” with about 700 to 800 new cases each year in the United States.

Symptoms of this type of cancer vary since neuroblastoma can start in different places in the body, and neuroblastoma cells can also sometimes release chemicals called hormones, which can affect other parts of the body. According to the American Cancer Society, some of the more common symptoms can include:

Signs and symptoms might be different depending on where the tumor is, how large it is, how far it has spread and if the tumor makes hormones. It’s also important to note that many of these symptoms can be caused by things other than this cancer. Regardless, you should always investigate any changes to your child’s health.

Treatment advances in recent decades have lead to 85 percent of children with cancer now surviving five years or more, according to the American Cancer Society. This is up from 58 percent from the mid-1970s.

But according to the National Pediatric Cancer Foundation, more than 95 percent of childhood cancer survivors have significant health-related issues because of the current treatment options, and only 4 percent of the billions of dollars spent each year on cancer research and treatments are directed towards treating childhood cancer in the United States. Since 1980, fewer than 10 drugs have been developed for use in children with cancer while hundreds of drugs have been created exclusively for adults.

Dr. Elizabeth Raetz, director of pediatric hematology and oncology at NYU Langone’s Perlmutter Cancer Center, reminded us in a previous interview that there is still reason for hope.

“There are also targeted treatments and different immunotherapies that have been studied in adults and have now moved into clinical trials for children and there has been a great deal of excitement in the community about that,” Dr. Raetz told SurvivorNet.

Caring for a Child with Cancer

Still, navigating a child’s cancer diagnosis can be incredibly tricky – something Jayne Wexler knows all too well.

She had to fill the roles of parent and cancer caregiver when her son, Justice, was diagnosed with acute lymphoblastic leukemia. Thankfully, he has since recovered.

In a previous interview with SurvivorNet, Wexler explained how she managed to be a mother and a caregiver all at once.

“Being a caregiver is a huge job,” Wexler said. “Fortunately, my husband and family were very supportive … it’s really hard to see your child go through this. If it could be me, I would take it in a second. You just go on auto-pilot and you just do what you have to do.”

But that doesn’t mean it was always easy. Wexler admitted that as a parent caring for a child with the disease, you don’t have a lot of time to sit down and deal with your own emotions.

“You don’t have that much time for yourself,” Wexler said. “I try to stay strong, but then sometimes you just want to go and cry, and you need to cry… it’s good to cry.”

RELATED: A Childhood Cancer Survivor Shares Her Beautiful Appreciation For Life: ‘Life Is Short… You Can’t Take Anything For Granted’

The survival rate for children with cancer has improved over the past few decades, but pediatric cancer is still an incredibly hard thing for a family to go through. In her own caregiving experience, Wexler found therapy to be a great way to process everything happening to her family. Regardless of whether it’s therapy or participating in your favorite activities or something entirely different, it’s important to find ways to also take care of yourself as you’re taking care of your child.