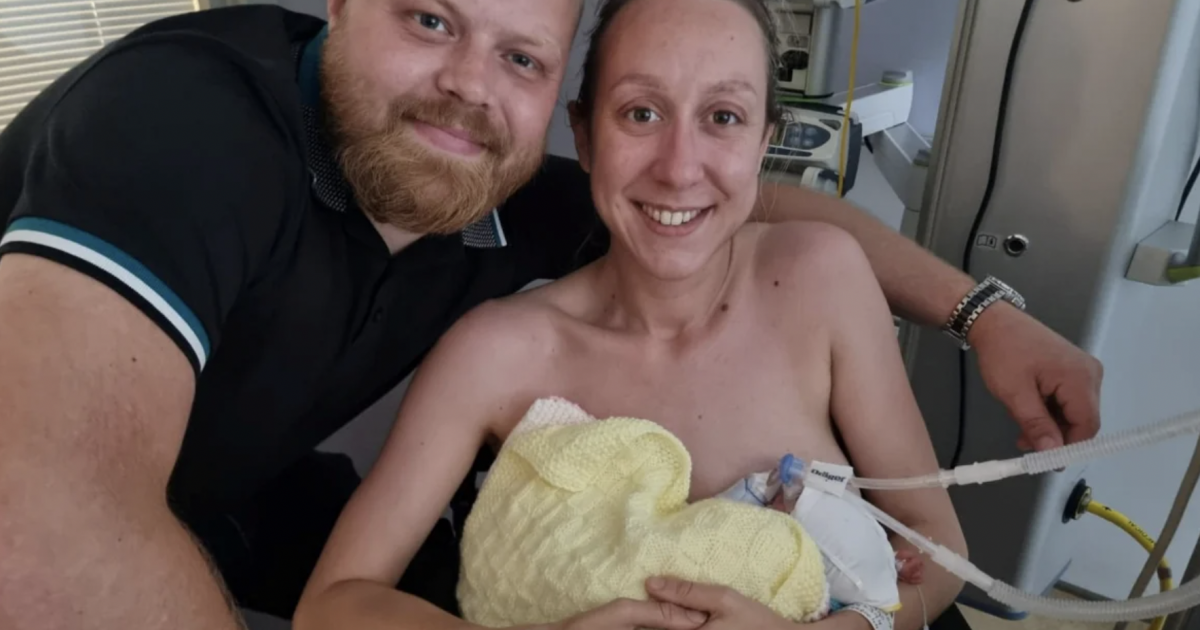 Look for Signs of Ovarian Cancer-- "The Cancer That Whispers"

Harriet Elsdon, 32, has been through a lot since pregnancy. But now the ovarian cancer warrior “can see a light at the end of the tunnel” – and she thanks her baby girl.

Elsdon was 20 weeks pregnancy when doctors first found a cyst on her right ovary. They didn’t know it was cancerous at the time, but it only grew. The plan was to have a check-up scan at 29 weeks pregnant.

Read More
But baby Maddison wanted to meet the world sooner. And on July 1, Elsdon had such severe stomach pains that forced her to go to the hospital. Within 20 minutes of being there, Elsdon gave birth to her baby girl who was meant to arrive in October. “After three pushes, she was out,” Elsdon said. “It was such a whirlwind experience and she was so tiny when she was born. “She was passed over to me and Nicholas in plastic wrap before going into the neonatal ward.”

Five days later, she decided to go back to a doctor for the strong pains in the right side of her stomach while visiting Maddison in the ICU. After awaking from a recommended exploratory procedure, she received her shocking diagnosis of ovarian cancer.

“It’s almost like she knew she had to come out,” Elsdon explained. “If she didn’t I’d be looking at stage three or four ovarian cancer.

“Maddison really saved my life – but she won’t hear that from me as she’ll be using it against me when she’s a teenager.”

Doctors gave her the choice of undergoing chemotherapy or relying on regular CT scans, but Elsdon had a procedure to remove her right ovary and one fallopian tube and began chemotherapy treatments just weeks later.

“I immediately knew I was going to have chemo because I had to stay alive for my children,” she said.

The mother of three is now awaiting her final chemo session, but she’s “doing okay.”

“I’m still on antibiotics and blood fillers will be around for another few months, but I feel like I can see a light at the end of the tunnel,” she said. “It’s been a full-on half a year, but I’m doing okay and I have my baby girl by my side.

“Chemo isn’t fun but I’ve gotten through it and I can’t wait to have Christmas at home with the family.”

And though luck and cancer don’t always go hand in hand, Elsdon is feeling blessed that things worked out the way they did.

“I always think, if I haven’t gone into early labor, I don’t think the tumor would have been caught in time,” she said. ”I was so lucky my cancer got caught when it did and that I’ve had such good treatment.”

Ovarian cancer is when the ovaries – which produce the sex hormone, estrogen, as well as eggs – become cancerous. Women have two ovaries, one on either side of the uterus.

Your risk for ovarian cancer may be increased if you have gone through menopause, have a gene mutation like BRCA1 or BRCA2, are obese or overweight, had your first pregnancy after age 35 or never carried a pregnancy to full-term, have a family history of cancer or used hormone replacement therapy. You should talk with your doctor about your potential risk for the disease.

Ovarian cancer is known as the cancer that whispers because symptoms are vague and sometimes similar to regular menstrual cycle fluctuations. Dr. Beth Karlan, a gynecologic oncologist with UCLA Health, says that ovarian cancer can be difficult to recognize with its subtle symptoms.

Ovarian Cancer: The Cancer that Whispers

“Ovarian cancer does not have any specific symptoms,” Karlan said in an earlier interview with SurvivorNet. “It’s often referred to as the cancer that whispers in that it has symptoms that are really very vague… and nothing that may bring your attention directly to the ovaries.”

But Dr. Karlan still wants women to keep an eye out for a variety of possible symptoms.

“The symptoms include things like feeling full earlier than you usually would when your appetite is strong… Feeling bloated,” she added. “Some changes in your bowel habits. Some pain in the pelvis. These are symptoms women may have every month. These are not very specific. But what we’ve found from multiple studies, it’s this constellation of symptoms.”

RELATED: Annual Ovarian Cancer Screenings Do Not Save Lives, Study Suggests; Women Should Listen for Signs of the ‘Cancer that Whispers’

“We must remember that prevention is key and advocate for all women to discuss their family history and individual risk factors with their doctors and ask whether there are risk-reducing options available to them,” Dr. Wethington wrote.

Our advice to readers: See your doctor if you feel like something is off. Given that ovarian cancer can have no symptoms or a myriad of symptoms that you might easily brush off as nothing, it’s important to always seek medical attention when your gut is telling you something might be wrong. That doesn’t mean we should assume the worst every time we feel bloated or have a change in appetite, but it does mean that we should always try to listen to the signs our body is giving us.