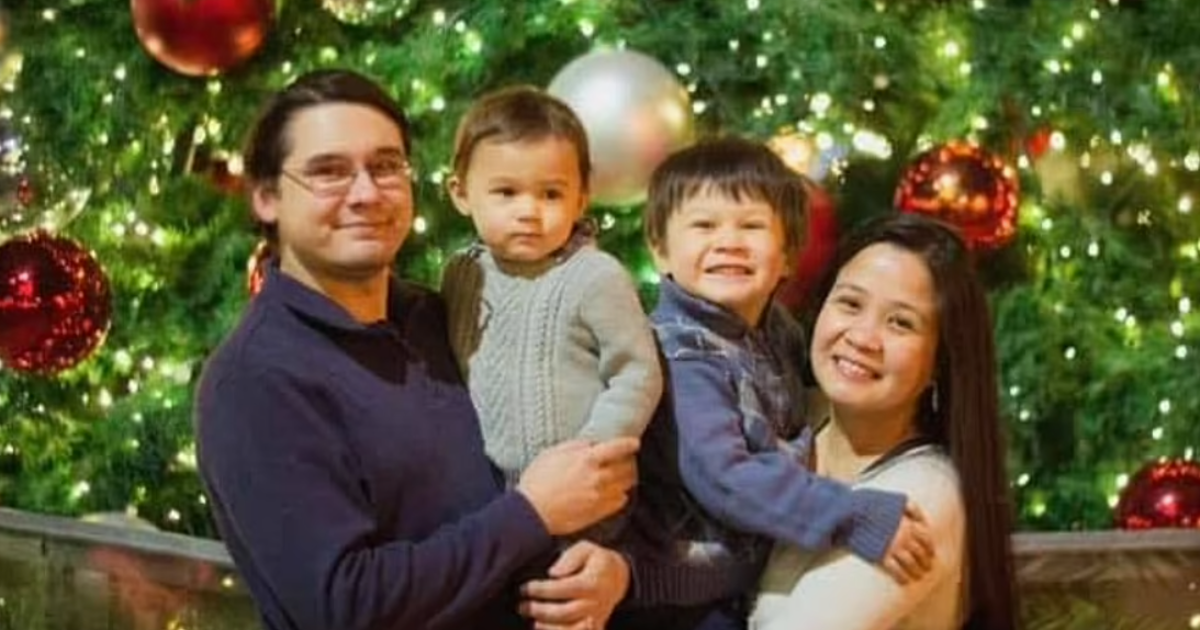 Since Nick Schuber, of Tinley Park, Illinois, was diagnosed with stage 4 cancer on November 5, 2022, life has changed slightly for his wife Sheena Schuber and their two sons, A.J. and Michael.

The dad-of-two’s advanced cancer diagnosis left Sheena with no “drive” to decorate their house for the holidays.

Read More
“The kids were asking me every day,” Sheena, whose family normally “goes all out” with decorations during Christmas time, told TODAY.com. Nick even dresses up as Santa every year. She explained her family usually decorates two Christmas trees and embellishes the outside of their home with all sorts of decorations, but this year Sheena didn’t have the energy to keep up with their regular traditions, so her children stepped in to help. However, when the holidays neared, their children, ages 7 and 3, decided to pull out the decorations and get to work.

“We cried when we saw it and thought, ‘Wow, the kids are handling this way better than us,’” Sheena told the news outlet.

She noted that every time she and her husband ask the boys what they want for Christmas, “they just say all they want is for ‘Jesus to fix daddy.’”

According to Dr. Ashurina Ream, a psychologist who spoke with TODAY.com, “There are so many lessons we learn when we allow our children to join us in the memory-making.”

She continued, referring to the heartwarming gesture of A.J. and Michael decoration their Christmas tree, “We teach them and ourselves that things don’t need to be perfect. We empower our children to make decisions. We allow space for creativity. We make room for fun. We share the load. But perhaps one of the most important things that happens is that we remember these moments.”

Talking To Kids About Cancer

Discussing a cancer diagnosis with children can be really complicated. You want to be honest with them and you want them to be prepared for what might happen, but at the same time you want to protect them, and be as gentle as possible.

John Duberstein, who lost his wife Nina to cancer, explains that he and his wife tried to take a progressive approach – and be as open with their kids as possible. But as honest as they were, they ran into some issues with their kids understanding the disease. When Nina started to look healthier, for example, the kids assumed she was getting better … but that wasn’t the case.

“It was a real eye-opening moment for two people who felt like they were dealing really head-on with this stuff, talking to the kids,” John says. “So I think it’s important to be open with the kids as much as you can, as much as you feel like they can handle. But it’s also important to revisit it and not make assumptions … At the end of the night, what Nina had to tell them was, ‘I’m not ever going to get better. My cancer is not ever going to go away,’ it was hard for them to hear even though they’d already been prepared.”

Obviously, not every parent feels comfortable sharing so much about their diagnosis with their children. Some survivors have even told us that they were afraid to tell their family members – but in John and Nina’s case, honesty was the best policy.

Sometimes The Hardest Thing About A Cancer Diagnosis Is Telling Family

A lot of cancer survivors, who also happen to be parents, have told us that telling their kids about the diagnosis was one of the hardest parts of dealing with the disease. There’s an instinct to protect kids from worrying about the worst that could happen. That’s how breast cancer survivor Victoria Rego felt when she had to tell her teenage daughter that she was sick. However, she was able to use the experience to demonstrate real strength for her daughter.

“I’ve had the opportunity to show my daughter that no matter what happens, you can’t let it knock you down,” Victoria said.

Victoria was diagnosed with triple-negative breast cancer. She said that at the time, she couldn’t even fathom how she would go about having the conversation with her daughter. “I’m a single mom, and she had just lost her idle, her great grandmother a few months before,” Victoria said. “So, telling her that this was happening was just beyond my understanding of how I was gonna do it. But I did it, with the held of her father … I can only imagine that it was frightening for her, even though she didn’t let it on.”

Later, after treatment was finished, Victoria’s daughter told her that she always knew she would pull through — “because of your strength, I always knew you were gonna be OK.”

For those of you who have recently been diagnosed with an advanced stage cancer, or if you’ve been living with the disease for years, try not to panic if a doctor brings up palliative care, as there are common misconceptions with the term “palliative.” It’s important to get the facts straight about this frequently misunderstood aspect of your treatment.

RELATED: Palliative Cancer Care is Different for Everyone

Often, when patients hear the term palliative care, they assume the worst: that their cancer is no longer treatable, and that their oncologists have decided to transition away from aggressively treating the cancer to providing peace and comfort during the final days. This couldn’t be further from the truth.

A top Stanford University oncologist, Dr. Lisa Diver, a gynecologic oncologist at Stanford University, explains that palliative care isn’t the same as hospice. Its a type of care that’s meant to address the symptoms and side effects that cancer or its treatment can cause.

Clearing Up Misconceptions About Palliative Care

The National Cancer Institute (NCI) defines palliative care as “an approach to care that addresses the person as a whole, not just their disease.” It’s a type of care that’s meant to address the symptoms and side effects that your cancer or its treatment may cause, ranging from psychological experiences like stress and fear to physical experiences like pain and discomfort.

“It doesn’t mean that your doctor is going to stop treatment or even wants to talk about that, but simply that he or she thinks it’s important to support all aspects of your health,” Dr. Diver explains. “That could be pain control, [relief for] nausea or constipation, mental health care. All of these other symptoms that commonly arise and are intertwined inextricably with your cancer care.”

Although it isn’t clear what type of stage 4 cancer Nick has, his story is likely far from over, and it’s important for survivors to stay positive and continue living life day by day. There are for more positive stories these days when it comes to this disease and we need to keep fighting!

Winter Is Around The Corner And So Is COVID Season: Actress And Cancer Survivor Julia Louis-Dreyfus, 61, Says Get A COVID-19 Vaccine