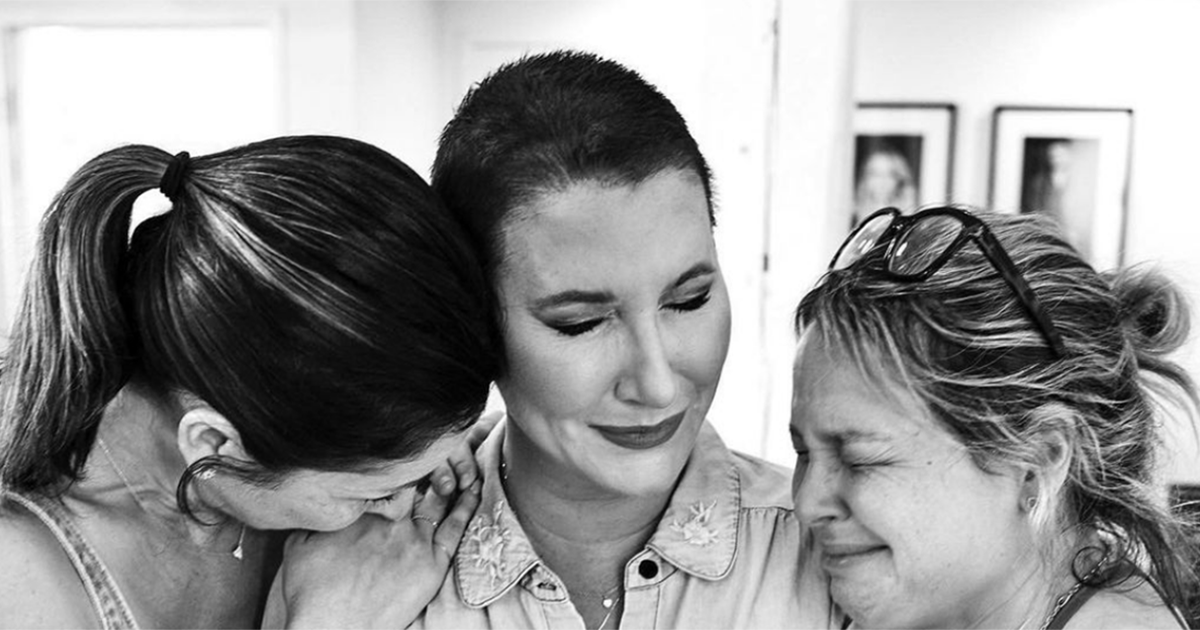 Just a few hours after completing her first chemotherapy treatment for breast cancer, Clea Shearer took the plunge: she shaved her head.

On Friday, May 20, the 40-year-old professional organizer and Netflix star shared a black and white photo of herself sitting in a treatment chair at Vanderbilt-Ingram Cancer Center Belle Meade in Nashville, Tenn. Her husband, John, captured the image. (He’s a professional photographer.)

Read More
“Today marked my first day of Chemo,” Clea wrote alongside the photo on Instagram. “As the day approached, I started sleeping less, worrying more, and even had one big tantrum last night that I can only describe as a child who’s next in line for a huge roller coaster, and last minute screams, ‘I can’t do this!! Let me off!’” Another few hours later, she marked another breast cancer milestone.“Another breast cancer milestone … John shaved my head, my friends held my hand, and I shed a few tears. Onward. 💗” she posted to Instagram on Friday evening.

The post included a photo of Clea sporting a freshly shaved head, as well as an image of her and two friends (including co-founder of The Home Edit, Joanna Teplin, 42) holding hands and crying.

In a video posted to The Home Edit’s Instagram Story a few minutes later, Joanna said of her friend’s important milestone, “This is something monumental. Clea shaving her head, I had to of course be here in solidarity.”

Clea Shearer lives in Tennessee with her husband and their two children, Stella, 11, and Sutton, 7. She co-founded The Home Edit with her best friend and business partner, Joanna. Their business became such a success that Netflix opted to make a television show of it. Netflix released the second season of Get Organized with the Home Edit on April 1, shortly before Clea received her cancer diagnosis.

There are quite a few side effects that come along with chemotherapy treatment; one of the most common, and dreaded, is hair loss. Other side effects of chemotherapy can include nausea, constipation and neuropathy.

“It’s one of the things that people can see from the outside that people may know that you are ill,” Vivian Ruszkiewicz, a nurse practitioner with OhioHealth, a not-for-profit system of hospitals and health care providers in Columbus, Ohio, previously told SurvivorNet, “and that poses a lot of stress for patients.”

Ruszkiewicz said that some people who only experience partial hair loss still choose to wear a wig, like many people who lose their hair completely, before chemotherapy so that they’re prepared and “can feel more like themselves during chemotherapy.”

Then there are others, like Clea Shearer, who choose to embrace their hair loss and shave their head before the balding even begins!

“Then it will kind of continue from there, as long as you aren’t being treated with another medication that might cause hair loss,” she added. “But in general, most people do have a resumption of hair growth, and can slowly over time put away their wigs and scarves, and are able to kind of go back to what they expected in terms of their hair growth.”

In other words, remember that hair loss is temporary!

Last month, Clea Shearer announced that she had been diagnosed with breast cancer and that she would be undergoing a double mastectomy.

“I found a lump myself (in) the last week of February,” Clea posted to Instagram on April 7. “I had been trying to make an appt with my OB(GYN) for several months, and even when I told them I found a lump, they couldn’t accommodate me. I had to request a mammogram from my general doctor, which led to an ultrasound, and then an emergency triple biopsy.”

Clea, who’s been sharing regular updates about her health on Instagram, was originally told her cancer was stage 1, but during the nine-hour surgery on Friday, April 8, doctors found cancer in one of her lymph nodes, which elevated the cancer to stage 2. The type of breast cancer Clea was diagnosed with hasn’t been been made public yet, but she said her cancer is “aggressive and fast-moving,” however, “I caught it early.”

She had two tumors, one measuring 2 centimeter in size and the other 3 centimeters (she was originally told each tumor was 1 centimeter). The tumors were sent to a lab in order to determine if Clea would need chemotherapy or radiation, and it turns out she’ll need both.

According to her Instagram, Clea also underwent a second breast cancer surgery shortly after her double mastectomy because “some of my skin tissue is just NOT having it…”

It’s now been over a month since her surgeries, so the next phase of treatment has begun.