Elderly Couple Marries After Each Suffered the Loss of Their First Spouse: ‘We Don’t Have That Many More Years to Do Something Dumb and Stupid’ 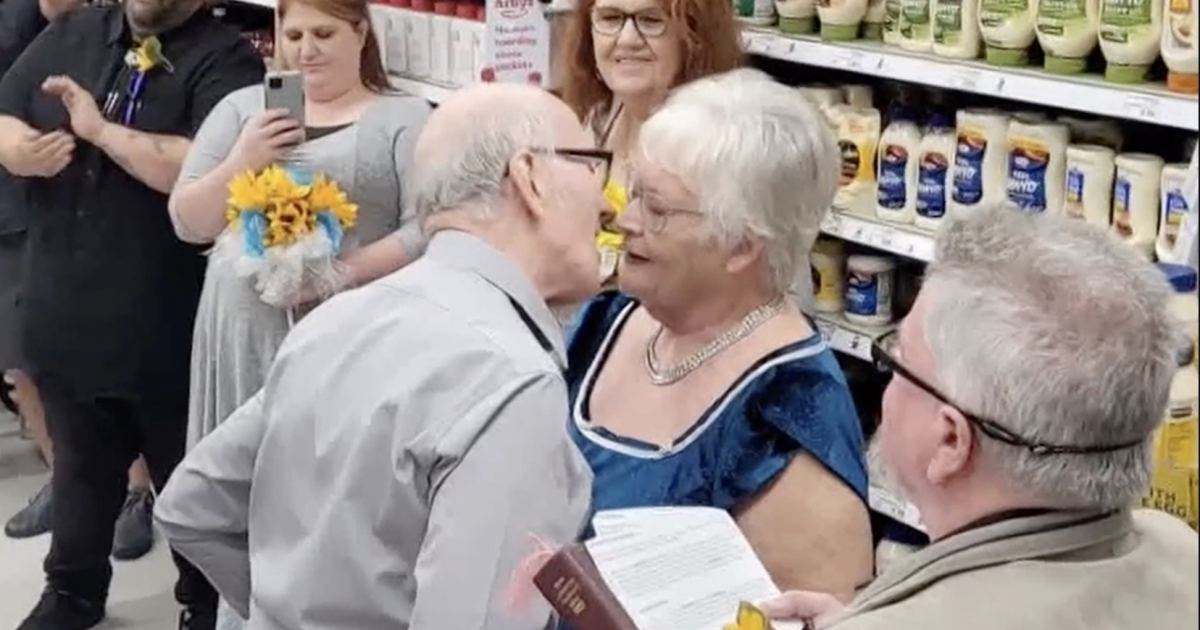 The Many Approaches to Overcoming Loss

Life goes on after the tragic loss of a spouse. But how you move forward is entirely up to you. And if you’re like Brenda and Dennis Delgado, love may yet find you again — in the aisles of a grocery store.

Brenda, 72, and Dennis, 78, first met last year while shopping in the mayonnaise aisle of their local grocery store. And while Brenda went about her business of searching for Miracle Whip, Dennis approached her and made a quip about the masks they were wearing.

Read More
“We both had masks on, and I say to her ‘you know the best thing about wearing a mask?’” Dennis told the New York Post. “’You could pass these [people] not wearing a mask, and curse them out under your breath, they don’t hear a word you’re saying,’ and she started laughing.” The two exchanged numbers after leaving the store, and the rest is history. Dennis even went to a service at Brenda’s church the following week. RELATED: “I Needed A Partner,” Says Duane “Dog” Chapman, Who Turned To The Bible After Losing His Wife Beth To Lung Cancer

And though their chemistry was instant, it was a shared experience of loss that brought Dennis and Brenda together. Before meeting, Brenda had recently lost her husband of 30 years to cancer and Dennis had just lost his wife of 45 years.

Then, over a year after they first met, the couple decided to return to their favorite spot in the grocery to tie the knot.

“It was my idea to get married there,” Brenda said. “I’m kind of weird okay.

“We don’t have that many more years to do something dumb and stupid.”

The Loss of a Spouse to Cancer

Losing a loved one to cancer, or for any other reason, can cause immeasurable pain. And while it’s difficult to imagine life without someone like your significant other, it can be important to have difficult conversations with your loved one in advance if both parties are willing to talk.

John Duberstein can attest to the importance of these conversations. After losing his wife, writer Nina Riggs, to metastatic triple negative breast cancer, he told SurvivorNet all he wished for while she was suffering was for things to go back to the way they were — but Nina had already accepted her new normal.

The Toughest Conversations: Losing a Spouse to Cancer

“I really wanted things to go back to normal, whatever that meant,” John said. “She was not for that. She wanted to embrace the existence that she had, even before she knew she was going to die imminently.

“I did not want to talk about what was going to happen with me after Nina died. Nina is the one that really brought it up, she brought it up a number of times. She wanted to make sure that I knew that it was OK … she really wanted me to have another relationship after she was gone.”

RELATED: John Prine’s Widow Shares the Story behind the Musician’s Clairvoyant Song ‘When I Get to Heaven’; Musician Battled Cancer Twice, but Passed from COVID

John said that even with the pain of losing Nina, and even though he didn’t want to talk about it at the time, he’s so glad that his wife started those seemingly uncomfortable conversations.

“In retrospect, I can’t even explain how glad I am that I had that,” John said. “And I think, across the board, the people who have had those conversations who I know who have lost a spouse are immeasurably glad that they did.”

There’s definitely no one way to cope with the loss of a spouse. Another widower, Doug Wendt, shared his thoughts on grief in a previous interview with SurvivorNet after losing his wife, Alice, to ovarian cancer.

If you are struggling with the loss of a loved one, or from any other mental health-related issue, check out SurvivorNet’s resources on taking care of yourself — body and mind.