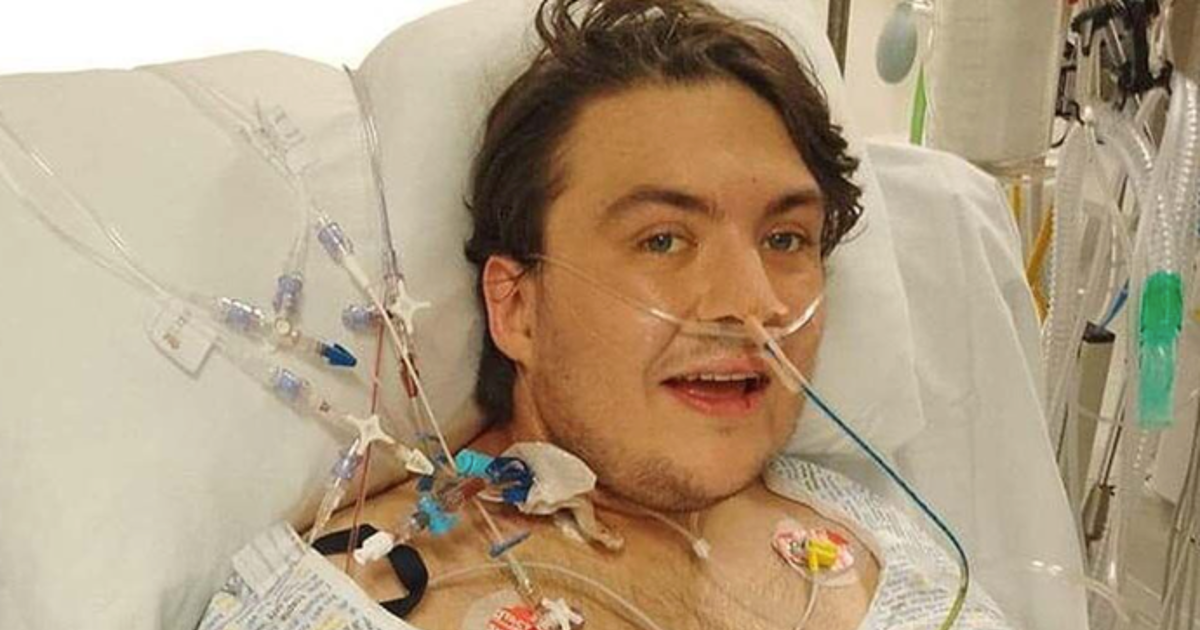 Scott Fryatt, a 24-year-old man from Edinburgh, Scotland, noticed something wasn’t right when he experienced severe abdominal pain. However, he didn’t seek medical help at a hospital in Glasgow until the discomfort subsided and his friend noticed his eyes to be an unusual color.

The Edinburgh University graduate eventually learned his liver was failing and his blood counts were off before doctors sent him for more testing. It wasn’t until after Fryatt learned he needed a liver transplant that he was diagnosed with lymphoma.

Read More
Fryatt first experienced symptoms when he was housesitting for a friend in Glasglow. He felt “violently” sick with abdominal pain during that time but it soon passed. Then his friend noticed at lunch that his eyes were tinted yellow on the sides – prompting Fryatt to seek immediate medical help. Doctors tested him for gallbladder stones and possible hepatitis, but he was found to have neither of those. He told EdinburghLive: “They could not find anything wrong with me but my liver was failing and my blood counts were all over the place.” “There is this chemical called bilirubin that indicates how healthy your liver is, the higher the number the more severe the liver failure, and mine were through the roof,” he explained, noting that doctors were unsure what he was suffering from.

According to Cleveland Clinic, jaundice, one of the symptoms Fryatt was experiencing, is “a condition in which the skin, whites of the eyes, and mucous membranes turn yellow due to a high level of yellow-orange bile pigment.” And jaundice could be a symptom of lymphoma, as per the American Journal of Gastroenterology.

“They carried out a lot of tests but decided to send me to see a liver specialist at the Royal Infirmary Edinburgh,” Fryatt said. “I spent about four or five weeks there getting further tests done and put on 22kg in water weight which I found out was common when your liver starts to fail.”

Fryatt continued, “I was so ill and getting worse as time went on. After a while, they said I needed a liver transplant and began carrying out scans to make sure I could physically cope. Unfortunately during this process, they also found out that I had lymphoma. They carried out a biopsy to make sure that the procedure would not make the cancer go mad.”

Fryatt was lucky to be cleared and given an urgent transplant within a week, back in June 2022. Then in October, he underwent a full body scan to see if the lymphoma had stayed in one sport or spread.

“I went into the scan thinking that the lymphoma would be localized as doctors believed that was the most likely case. Unfortunately, it showed that it was everywhere and had spread all over my body,” he said.

“It was tough going in and expecting good news and to then walk out with the knowledge that I had incurable lymphoma. The good news was that it can be treated and that it should not impact how long I live for.”

He underwent his first round of chemo in late October and has been battling the cancer ever since. And despite feeling tired amid the treatment, Fryatt is determined to raise money for The Teenage Cancer Trust, an organization helping people like himself. This weekend he will be hosting a gaming live stream to raise money.

Lymphoma is a type of blood cancer that is broken up into two separate categories: Hodgkin lymphoma and non-Hodgkin lymphoma. The main difference between the two is that Hodgkin lymphoma has distinctive, giant cells called Reed-Sternberg cells. The presence of these cells, which can be seen under a microscope, will help your doctor determine which of the two lymphoma types you have. So, if these cells are not present then that points to non-Hodgkin Lymphoma.

What makes this cancer even more complex is that non-Hodgkin lymphoma has two subtypes: B-cell or T-cell lymphoma (two infection fighting cells). About 85% of people diagnosed with non-Hodgkin lymphoma will have B-cell lymphoma. These cells produce antibodies – proteins that react to foreign substances like viruses or bacteria in your body. The antibodies attach to another protein on the surface of the invading cells, called an antigen, to target and destroy them.

Recognizing symptoms of lymphoma can be tricky, which can sometimes lead to late stage diagnoses. However, most common signs to look for include: swollen glands in your neck, armpit, or groin, fever, chills, night sweats, unexplained weight loss, consistent fatigue, or spontaneous swelling in the stomach.

The sneaky nature of symptoms, coupled with a lack of screening for lymphoma, leads many people to be diagnosed at an advanced stage — III or IV. By that point, the cancer may have already spread throughout their body. Yet even at a late stage, the outlook isn’t as dire as many people might assume.

Related: 6 Symptoms of Lymphoma & How to Spot Them

“The one thing that I always reassure people about when they are diagnosed with advanced stage lymphoma is that, unlike other cancers, where advanced stage is a death sentence, that’s certainly not the case for lymphoma,” Dr. Elise Chong, medical oncologist at Penn Medicine, tells SurvivorNet.

The first lymphoma symptoms can be so subtle that you might not even notice them. It may not be until you visit your doctor for a check-up that you discover there could be a problem.

“People say, ‘But I feel completely fine,’ and that’s very normal,” Dr. Chong says. If a lump is found, often “it’s only because either someone palpated a lymph node and felt some swelling in their neck or in their groin or under their arm.”

If you are at risk for this cancer because you had cancer or an organ transplant in the past, you have an autoimmune disease, or you have an infection such as HIV or Epstein-Barr, it may be worth watching out for symptoms like these:

But keep in mind that these are more likely to be symptoms of something far less serious, such as a run-of-the-mill infection.

There are also a group of symptoms doctors refer to as “B symptoms.” Those include a fever, night sweats, or weight loss. “If people are having any of these symptoms, it’s really important that they tell their physician early so that the proper testing can be done,” Dr. Chong says.

Sometimes the first sign of lymphoma appears not as a symptom, but as a clue on an imaging test that’s done for another reason. “I have patients who’ve gotten into car accidents and said, ‘I had a scan of my body and they saw these lymph nodes,’ and that’s how initially the lymphoma was found,” says Dr. Chong.

Lymphoma Biopsy: What To Expect

If your symptoms appear first, your doctor might send you for an imaging test. An x-ray or computed tomography (CT) scan can identify the cause.

The only way to confirm whether you have lymphoma is with a biopsy. Your doctor will remove a piece of tissue from a lymph node, or the entire node. Then, a specially trained doctor called a pathologist examines the sample in a laboratory to see whether it contains lymphoma cells, and if so, which type of lymphoma they are.

A biopsy can either put your mind at ease by letting you know that you don’t have cancer, or give you a sense of direction by giving your doctor a launching-off point to plan your treatment. If you do have lymphoma, you can get at least some comfort from knowing that there are a number of good treatments to help manage it, even if you’re diagnosed at an advanced stage.

The experience you can expect going into a biopsy “depends on the type of biopsy that’s being performed,” Dr. Chong previously told SurvivorNet.

There are a couple of different types of biopsy used to diagnose lymphoma:

There are more than 40 different types of the disease, but Hodgkin lymphoma and non-Hodgkin lymphoma are the main two sub-categories with the latter being more common. Non-Hodgkin lymphoma cancers are more likely to spread in a random fashion and be found in different groups of lymph nodes in the body. Hodgkin lymphoma cancers, on the other hand, are more likely to grow in a uniform way from one group of lymph nodes directly to another. Early symptoms of lymphoma can be tricky to notice as they may include swollen lymph nodes, fatigue or unexplained weight loss. People often aren’t diagnosed with lymphoma until later stages of the disease because they didn’t notice the symptoms, but one of our experts says that later diagnoses can still have good outcomes. Some lymphomas, called indolent lymphomas, might not even need to be treated right away because they’re slow-growing. In this case, careful monitoring – including imaging scans such as PET/CT – is used to track the progress of your cancer and gauge whether it needs treatment yet.
NOW
PLAYING
Zanubrutinib Is A New and Improved Medication For CLL
NOW
PLAYING
Zanubrutinib May Delay Disease Progression in Chronic Lymphocytic Leukemia & Small Lymphocytic Lymphoma
NOW
PLAYING
Is A Restrictive Neutropenic Diet Really Necessary After a Bone Marrow Transplant?
NOW
PLAYING
For Some Advanced Breast Cancers Powered By Estrogen, The Drug Camizestrant Shows Promise Actually Degrading The Hormone
NOW
PLAYING
New Data: The Drug Ibrutinib May Help Some Younger Mantle Cell Lymphoma Patients Avoid A Stem Cell Transplant
NOW
PLAYING
Changing Landscape Of Ovarian Cancer Treatment: PARP Inhibitor Drugs Withdrawn For Some Indications