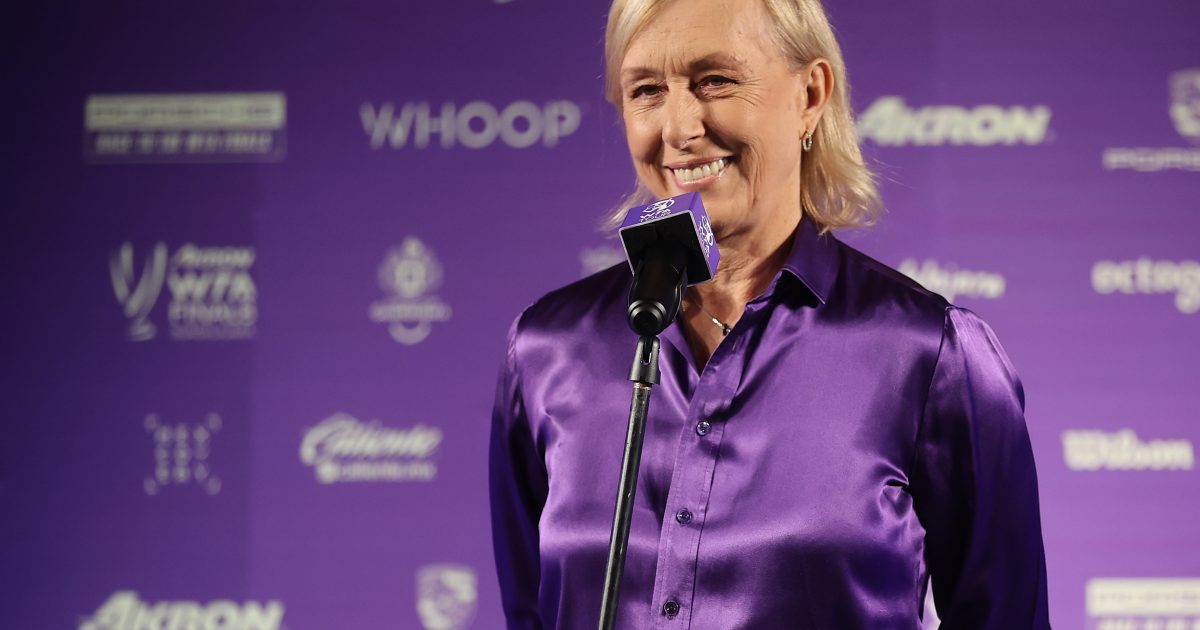 Breast cancer survivor and tennis champion Martina Navratilova, 66, has been diagnosed with breast and throat cancer. Thankfully, it’s reported that both cancers were caught an early stage, which makes them more likely to respond possible to treatment.

Read More
Navratilova, who is an 18-time Grand Slam singles champion, previously battled breast cancer in 2010. The Prague native says of her new diagnosis, reports the BBC, “The double whammy is serious, but fixable, and I’m hoping for a favorable outcome.” She continues, “It’s going to stink for a while, but I’ll fight with all I have got.” Navratilova will begin treatment in New York in January. She had planned to cover January’s Australian Open, but will amend her planned coverage, due to this diagnosis. The nine-time Wimbledon singles champion said she felt “helpless” after she was diagnosed with cancer in 2010, but decided to go public with the news to help other women suffering similar health problems.

In 2010, Navratilova was diagnosed with ductal carcinoma in situ (DCIS), a noninvasive form of breast cancer. It was detected via mammogram, the screening method for breast cancer that looks for lumps and early signs of cancer in the body.

In April of that year, the tennis champ went public with her health battle, shining a light on the importance of screening for breast cancer and getting mammograms. Women aged 45 to 54 with an average risk of breast cancer should get mammograms annually. (For women with a family history of the disease, you should begin screening earlier.) Speak with your doctor to schedule one if you’re overdue for your mammogram.

When a person has DCIS, stage zero cancer, it means abnormal cells can be found in the breast milk duct and have become cancerous but have not yet metastasized – or spread – to other parts of the body. Navratilova’s cancer was removed via a lumpectomy, and she underwent radiation to treat her cancer as well.

Should I Have a Lumpectomy or Mastectomy?

The BBC reports that Navratilova observed one of the lymph nodes in her neck was enlarged. She observed this during the WTA Finals in Fort Worth, Texas in November. As a result, the tennis star underwent tests, which showed she had stage one throat cancer.

The two main causes of throat cancer are smoking and excessive drinking, but throat cancer can also be caused by the human papillomavirus (HPV).

Dr. Ted Teknos, president and scientific director of the Seidman Cancer Center at University Hospitals Cleveland Medical Center, says in a previous interview, “When I first started training and practicing head and neck surgery, we saw this group of patients that were becoming increasingly more frequent, who were those patients who never smoked, were not drinkers, and were developing head and neck cancer. And in the beginning part of my career in the early ’90s and mid-90s, those were rare patients, but then, year by year, those numbers increased dramatically.”

“What we know now, through science, is going back and looking, decade by decade, the rates of HPV-related head and neck cancer have increased exponentially,” says Dr. Teknos. “If you look at the percentage of patients who developed throat cancer, really, cancer of the tonsils and the base of the tongue, in the ’80s compared to the 2010s, if you will, the rate of HPV-related head and neck cancers has gone up by 300%. So there is no myth. HPV causes throat cancer, and it’s a sexually transmitted disease. And it’s something that is an epidemic in the United States.”

Treatment for throat cancer can include surgery, radiation, and chemotherapy. Navratilova has not publically shared her specific treatment path.

Rocker Eddie Van Halen, 64, Says He Got Throat Cancer From Putting Metal Guitar Pick in His Mouth Is That Possible?

What is a Secondary Cancer?

A secondary cancer is a cancer in two parts of the body that has the same cancer cells. Dr. Janice Kim, a radiation oncologist and the disease site lead for breast cancer at Fred Hutchinson Cancer Center, speaks to secondary cancer risk – and radiation – in an earlier interview with SurvivorNet.

As a result of the tests that revealed throat cancer, it also showed a lump in Navratilova’s breast tissue. It was diagnosed as an unrelated cancer. Navratilova’s representative Mary Greenham says, “Both of these cancers are in their early stages with great outcomes.”

“We know that there’s no one size fits all and we customize and tailor treatment, both the treatments that people get and the order that they get them, based on the subtypes of cancer and a variety of different factors,” she explains.

“It’s very tailored, personalized precision medicine approach, for not only the person, but also the tumor,” Dr. Port says of treatment for this disease.