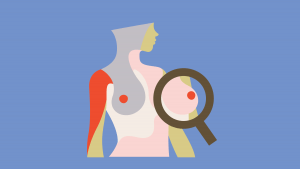 Breast cancer is the second most common cancer in American women (not counting skin cancers). Here are some key statistics

There’s a lot of exciting research currently underway — and new treatments are being studied every day.

Knowing your risk and being aware of symptoms is an important part of the prevention process. Because of awareness, screening, and incredible advancements in treatment,

Below, you can find basic information about breast cancer — including symptoms, how the disease is diagnosed, mammograms, surveillance, treatment, and living with cancer.

These symptoms can, of course, be due to things other than cancer. For example, a lot of women experience breast tenderness during certain times in their menstrual cycles. If you’re worried — talk to your doctor about it. They may want to perform an exam, or even schedule a mammogram just to be safe.

There’s some debate about when the right time to get a mammogram is, but current American Cancer Society guidelines call for: women ages 40 to 44 should have the choice to start annual breast cancer screening; women with average risk to begin annual mammograms at age 45 — and to continue through age 54;  women 55 and older can begin getting mammograms every other year.

When You're Getting a Mammogram, Ask About Dense Breasts

The Mammogram Debate: Should Women Start Breast Cancer Screening at 30?

When You're Called Back After a Mammogram

There’s some debate about when the right time to get a mammogram is, but current American Cancer Society guidelines call for: women ages 40 to 44 should have the choice to start annual breast cancer screening; women with average risk to begin annual mammograms at age 45 — and to continue through age 54;  women 55 and older can begin getting mammograms every other year.

When your doctor is determining the treatment for your particular cancer there are many considerations that factor into the decision.  Hormones, biology, and genetics will all play a role in determining your treatment. There are many options your doctor can choose at every stage of breast cancer. Before a specific route can be decided on, however, the cancer stage must be determined.

Stage Zero — Stage zero breast cancer, also known as ductal carcinoma in situ (DCIS), means that the cancer is confined to the inside of the milk duct, and has not spread through the walls into the nearby tissue.  DCIS is considered a non-invasive cancer. Some doctors don’t even consider it a cancer, and would prefer to take a watch-and-wait approach over treatment. Others may recommend the surgery route, which usually involves a lumpectomy, and sometimes radiation as well.

Stage One — Stage one breast cancers are relatively small; they either have not spread to the lymph nodes or only a small area of cancer has spread to the sentinel lymph node. Treatment will likely be surgery and radiation following surgery, along with chemotherapy or some other therapy. For women whose breast cancer is hormone receptor positive doctors will also recommend hormone therapy. For HER2 positive cancers the drug Herceptin will be recommended.

Stage Two — Stage two breast cancers are either larger than stage one tumors, or have moved to a few nearby lymph nodes. Treatment will likely be some combination of surgery, radiation, and chemotherapy.  If chemotherapy is also needed after surgery, the radiation is delayed until the chemo is done. The same approach is taken  to hormone receptor and HER2 positive as stage one

Stage Three — Stage three breast cancer typically refers to a relatively large tumor, about 2 inches across, that has invaded nearby muscle or skin. Chemotherapy is usually given before surgery. For HER2 positive and hormone positive tumors hormone therapy is given after surgery. Radiation is often needed after surgery. Another approach for stage III patients is having surgery first, usually a mastectomy. In this case surgery is followed by radiation, additional chemotherapy and hormone therapy for appropriate patients.

Stage Four — Stage four (or metastatic) breast cancer means the cancer has spread beyond the breast and nearby lymph nodes to distant parts of the body. While there is no cure for metastatic breast cancer, doctors have a lot of options when it comes to treating advanced disease. The main treatment for stage four is drug therapy — including hormone therapy, chemotherapy, and targeted drugs. Radiation and surgery maybe used but in this case it’s to prevent or treat symptoms or complications.

Certain tumors are driven by hormones, or feature proteins that can help determine the best route of treatment.

What is Triple Negative Breast Cancer?

We’ve interviewed some really amazing breast cancer survivors. Their stories are incredible, informative, and inspiring. They also have a lot of great advice about how to cope if you’re newly diagnosed.

Beautiful and Badass: Survivor Explains Why She Got Mastectomy Tattoos

The Flat Movement: Embracing Your Body After Treatment

The Courage to Be You: Meet Survivor Ericka Hart

How I Made it Through Cancer: Painting & Dreaming

You're Still You After Cancer: Chiara D'Agostino's Survivor Story

Paying it Forward After Cancer

We’ve interviewed some really amazing breast cancer survivors. Their stories are incredible, informative, and inspiring. They also have a lot of great advice about how to cope if you’re newly diagnosed.