‘My Heart Was Jumping Off My Chest!’ Mom, 31, Eight Months Pregnant With Her Third Child, Is Shocked To Be Diagnosed With Breast Cancer

Here's what to know about your risk of breast cancer if you're pregnant. 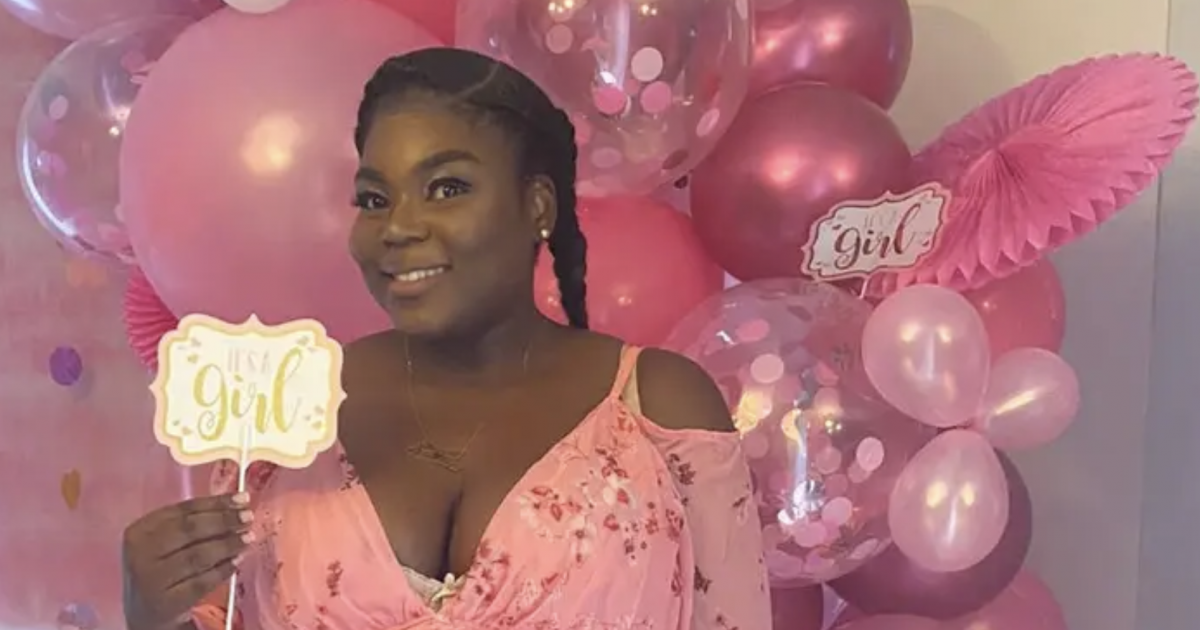 Florida woman Jennifer Deus was 31 and eight-months-pregnant with her third child when tissue in her left breast had started to harden and she noticed swelling in her armpit. Not long after the initial discovery would her doctors tell her she had breast cancer and would need to deliver her baby several weeks early.

“My heart felt as if it was jumping off my chest. I couldn’t catch my breath. I had nightmares because I kept thinking about the cancer inside my body. I’d been told that it was stage 2B,” said Deus, in an interview with Insider.

Read More
A stage two breast cancer diagnosis means the cancer is growing, but contained to the breast or the growth has only extended to the nearby lymph nodes. This stage is broken into two categories; 2A and 2B. The difference between the two will depend on the size and scope of the tumor. Deus says her scan showed two lumps in her breast and one in her armpit. Her medical staff at Palm Beach Health Network told her it was better for her to deliver the baby at 36 weeks. “The oncologist told me she was concerned that all the hormones during my pregnancy were making the cancer grow faster. She said that I’d need treatment as soon as I gave birth,” Deus told Insider.

Deus gave birth to a baby girl named Ishbel via C-section on October 15, 2021, around a month before her due date.

She began chemotherapy in November, completing six rounds in February of this year. Her doctors she said gave her the “all-clear” signal in May after having a double mastectomy and radiation treatment.

“I’ve never felt more alive. My experience with cancer has made me a better, stronger person. I love and appreciate my family more than ever,” she said.

What Is Pregnancy Associated Breast Cancer?

Deus is not the first and unfortunately not the last pregnant woman to be diagnosed with breast cancer. In fact, about once in every 3,000 pregnancies breast cancer occurs, says Dr. Natalie J. Klar, MD, medical oncologist at NYU Langone Perlmutter Cancer Center, in an interview with SurvivorNet.

Dr. Klar says the definition of a pregnancy associated breast cancer varies from practitioner to practitioner, but it’s typically defined as a breast cancer diagnosed and discovered during pregnancy, or within the first few years postpartum.

Related: Busy Mom Of Two, 25, Was Told Strange Lump Was ‘From Breast Feeding’ And Doctors TWICE Turned Her Away:’ It Turned Out To Be Cancer

The frequency of these incidents has been increasing recently, adds Dr. Klar. Which she attributes to the rise in women deciding to have children later in life.

The take home message from Dr. Linda Moy, a radiologist that specializes in breast imaging at NYU Langone’s Perlmutter Cancer Center, is for a woman to bring a lump or any concern to your doctors attention immediately.

“I would say for any woman that has a lump in a late stage [pregnancy], they should go ahead and see their doctor. But for those in particular who are a late maternal age or any family history of breast cancer, those are the ones that really need to see the doctor and I would recommend additional imaging with a breast ultrasound to begin with,” says Dr. Moy, in an interview with SurvivorNet.

During pregnancy and while you’re breastfeeding your body is changing, so one of the most important things to do is to watch for signs that seem abnormal to you, says Dr. Klar.

“I think it’s always important for young women because typically the mammogram screenings start at 40. So young women aren’t used to necessarily screening tests on their breasts, but I think they know their body,” said Dr. Klar.

She adds, it’s important to advocate for yourself and to tell your doctor you’re worried if the doctor doesn’t seem as concerned. Additionally, with the rise in pregnancy associated breast cancer primary care physicians and obstetrician/gynecologists (OBGYNs) should become more educated on this diagnosis.

One method to make use of when pregnant or not is a breast self-examination. If doing breast self-exams is something that works for you, and your doctor agrees, then you should do it.

“When we think about breast cancer prevention and awareness, the first step is that women need to feel comfortable with their breast and know what their breasts feel like normally,” said Dr. Comen.

Here’s how, according to the National Breast Cancer Foundation:

“During pregnancy, the breasts are really hard to examine. They’re lumpy, they’re bumpy, they change you know and doing a self breast exam and having a low threshold to see your obstetrician or even a breast specialist for an ultrasound evaluation it’s easy, do it,” says Dr. Michelle Specht, a breast surgeon in the division of surgical oncology at Massachusetts General Hospital Cancer Center, who spoke to SurvivorNet in an interview.

Dr. Connie Lehman, Chief of the Breast Imaging Division at Massachusetts General Hospital, explains when you should get a mammogram.

For women over 40, specifically, who are trying to get pregnant continued screening is extremely important, says Dr. Specht.

“We really emphasize that even if you’re actively trying to get pregnant, you should be doing screening mammograms starting at 40. Or, if you’re about to embark on a cycle of IVF [in vitro fertilization] and you’re thinking of getting pregnant, why not get that mammogram in the bank to give yourself the all clear,” said Dr. Specht.

In addition, she says to pay attention to your family history; if you’re at high-risk based on your family history and you have additional screening modalities, such as a breast MRI, make sure it’s up to date before you consider getting pregnant.

It is okay to do mammography and MRIs if someone’s breastfeeding, says Dr. Specht. The images are not as perfect “as we like them. But there’s no reason that you should not do it.”

Meaning women shouldn’t wait an entire two years to have their next mammogram because they got pregnant and breastfed for a year. Dr. Specht says she typically tells patients once they’re really good at breastfeeding and once they can decompress the breasts (or pump prior to a screening) they can get their mammogram.

What Should I Ask My Doctor If I’m Pregnant And Find A Lump?

If you find a lump or an abnormality with your breasts the number one thing to do is to push your doctor for additional testing, such as an ultrasound, according to the experts.

As hormone levels increase during pregnancy, the breasts will get bigger and continue to grow throughout your pregnancy. The breast feel more swollen and sore due to increased blood flow and fluid retention, according to Dr. Moy.

“So it’s easy to assume that a new lump is related to these physiologic (normal changes). Oftentimes we may ignore the lump and say, ‘oh, you know, it’s a lump, it’s normal.’ So these women are diagnosed a little bit later and may present with a more advanced cancer,” she added.

Similarly, Dr. Klar says worst case scenario is an extra test or ultrasound that shows normal results. Women should “get an ultrasound or get get the imaging of their breasts to make sure that it’s nothing more than just normal pregnancy or breastfeeding related changes.”

The main message here is ask your doctor for additional tests and don’t be afraid to stand up for yourself.

While it is an extremely scary and serious situation, Dr. Specht says, surgery when someone is pregnant is an option and has shown success. And even chemotherapy is a fine treatment option.

“The only thing you can’t give a pregnant woman is radiation. And so, you know, even if someone were to discover they were pregnant and faced with the decision to keep the pregnancy or continue the pregnancy from a oncologic perspective, most commonly we can get around,” said Dr. Specht.

She adds, most often women don’t have to terminate a pregnancy because they have breast cancer. The women are typically able to have chemotherapy and/or surgery, and can wait for the radiation until after delivery if they need it.

Related: Eight-Months-Pregnant Woman, 29, Felt ‘Burning’ In Her Breast And Was Told By Her Doctor It Was ‘A Clogged Bile Duct:’ It Turned Out To Be Cancer

“But I would say that I’ve treated you know at least one pregnant patient a year or or probably two. And I can think of you know, maybe two or three patients who actually needed to go through with a termination because of their cancer,” said Dr. Specht.

NOW
PLAYING
35-Year-Old Woman With Breast Cancer Told She Was Too Young For A Mammogram
NOW
PLAYING
Genetic test for breast cancer may save lives or cause unnecessary stress
NOW
PLAYING
'Am I Going To Look Like Frankenstein?' Actress Miranda McKeon, 20, Of 'Anne With An E,' Opens Up About Her Mastectomy And Breast Cancer Battle
NOW
PLAYING
Five Things People Get Wrong About Breast Cancer
NOW
PLAYING
Beyoncé's Father, Mathew Knowles, 70, Is a MALE Breast Cancer Survivor: He's Warning That Men CAN Get Breast Cancer Too
NOW
PLAYING
The Major Change That Every Metastatic Breast Cancer Patient Should Get Tested For - SurvivorNet Adviser Dr. Elizabeth Comen On 'GMA'