Kam Schalk is a 22-year-old videographer, college grad and steadfast optimist. Oh, and she’s also a lymphoma survivor. But what defines her cancer journey is not the disease itself, but rather her unrelenting positivity through all the ups and downs – an amazing quality that’s been beautifully captured, with the help of Kam herself, for SurvivorNetTV’s first original docuseries: Love, Kam.

Kam’s cancer story began after bloodwork returned with some red flags in 2020. A month later, she had three surgeries and three infusions that left her with three scars. 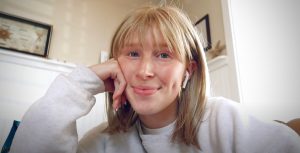 On June 24, 2020, she got a call explaining that she likely had lymphoma – a type of blood cancer. Just a month later, she received her official diagnosis: stage four nodular sclerosis lymphoma – a highly curable type of Hodgkin lymphoma that accounts for 70 percent of classical Hodgkin lymphoma cases. Her oncologists decided that putting her on the drug combination AVD + Brentuximab in a clinical trial was the best treatment path for Kam given that the lymphoma had spread into her lung tissue. Thankfully, they were right.

RELATED: Clinical Trials Can be Life-Saving for Some

But through all the moments in between – the important phone calls, her hair falling out, the side effects of treatment, the laughs with friends, the food with family, kisses from her little, black-and-white dog – Kam took her passion for storytelling and used it to help her process all that’s been happening to her.

Now, with a cancer-free status she holds dear and a recently earned degree from the University of Washington, Kam is beginning a new adventure with a move to Los Angeles, California. In following her inspiring story, we present to you this 35-episode series centered around a young woman with a zest for life who touches everyone she meets: Love, Kam.