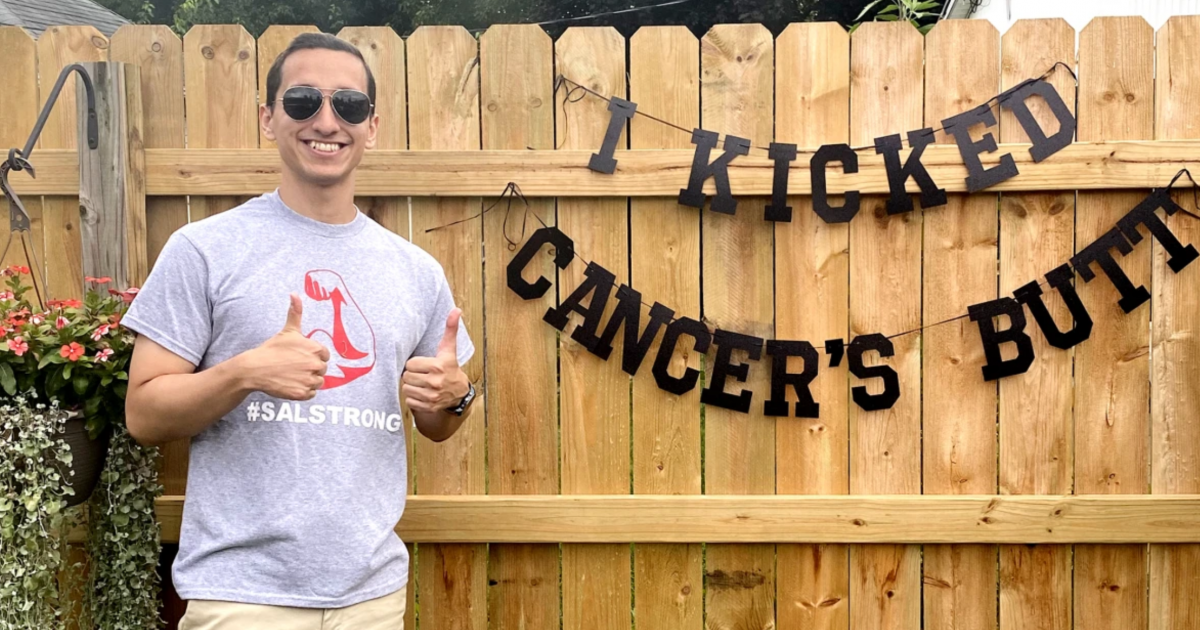 As a medical student, Sal Gomez learned about testicular cancer prior to his diagnosis. Even still, his initial symptom caught him off guard.

Gomez, 26, noticed a pain in his right testicle and lower back last year. Being a busy medical student working in a surgical rotation and studying all night, he thought he must have pulled a muscle.

Read More
“I wasn’t really sure why it was going on there. I never had anything like that before,” he said. “I was really thinking I hurt myself, and I was super busy with the surgical rotation. It’s like a 5 a.m. to 5 p.m. type of thing,” Two weeks past, and his pain didn’t recede. Gomez even performed a self-examination on his testicle without feeling any “lumps or bumps,” but he still decided to make an appointment with his doctor. “He wasn’t super concerned about what was going on,” Gomez said of his appointment. “He did order a bunch of labs and an ultrasound.”

But given Gomez’s busy schedule, he decided to put off his ultrasound since he started to feel better and he didn’t seem to have the standard signs of testicular cancer.

“When you learn about testicular cancer, you learn symptoms like a lump,” he explained. “You really don’t think about cancer being painful. You usually think of a pea-sized lump (on) a testicle that’s not painful but maybe has some kind of enlargement.”

RELATED: Fitness Fanatic Construction Worker, 28, Wasn’t Worried By His ‘Lumpy Testicle’ Because ‘I Thought I Was Invincible:’ It Turned Out To Be Cancer

His pain eventually returned, however, so he eventually decided to have the ultrasound.

“Pain really shouldn’t be coming and going,” Gomez said. “I did another exam, and at the time, I didn’t feel a lot there.”

Shockingly enough, the ultrasound did find a mass that “looked particularly cancerous.”

“A couple of days later, I got a CT scan of my abdomen and my (pelvis) that revealed what the back pain was,” Gomez said. “I had these very enlarged lymph nodes in my lower back area, up around where my kidneys are.”

It wasn’t until about a week later that doctors confirmed he had stage 2 testicular cancer after removing his testicle. He was just 25 at the time. From there, he underwent chemotherapy.

“I did nine weeks of chemotherapy after having the primary tumor removed. It was pretty brutal,” Gomez said.

Follow-up scans showed his lymph nodes were somewhat responsive to his chemo, but they were still large enough for Gomez’s doctors to be worried about cancer being there despite earlier scans revealing that his cancer hadn’t spread.

He then had an an eight-hour lymph node dissection to remove them. And though that recovery was “tough,” a later pathology report showed “no viable cancer.”

Save A Nut!: Testicular Cancer Survivor Mark Borja Makes it His Mission to Spread Awareness

Now, he wants others to hear his story in order erase the stigma surrounding testicular cancer and educate people about less common signs of the disease.

“I had to tell everybody that I’m going to lose my testicle, and on top of that I think the biggest thing is — and I’m an example of this — men don’t want to go to the doctor,” Gomez said. “If we don’t talk about it, how can we find these really dangerous things?”

Dealing With the Shame That May Come With Testicular Cancer