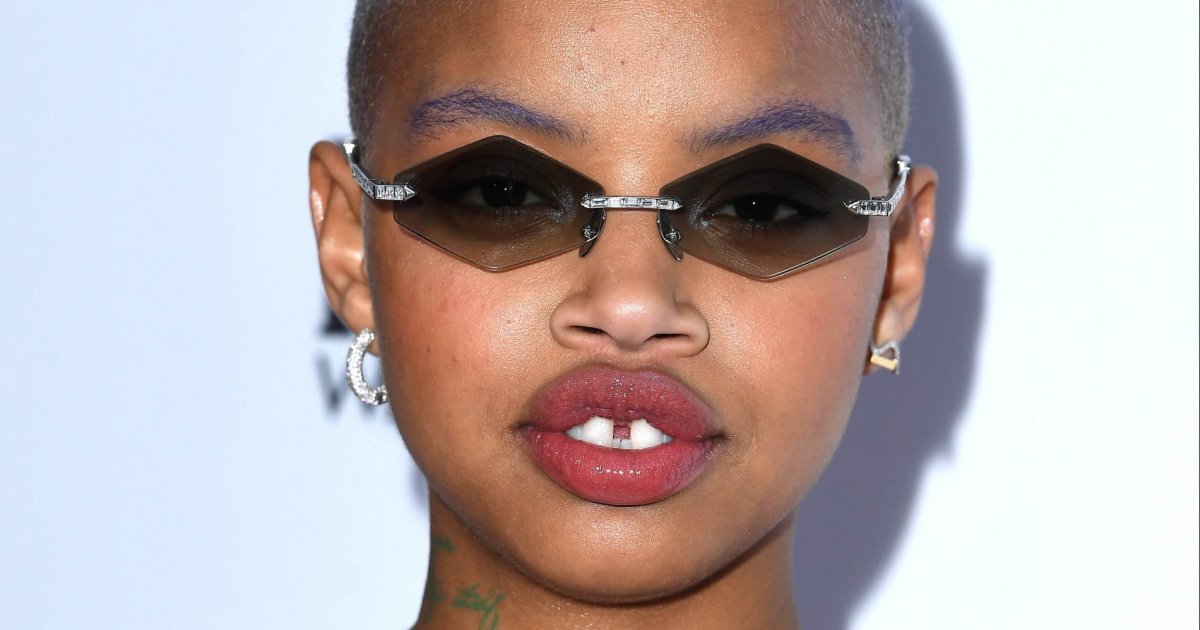 Slick Woods Was Diagnosed With Melanoma in Her Early 20s

Many people know Slick Woods, 26, has a commanding presence as a model. But now the melanoma warrior is making a name for herself with her acting, too.

Woods, born as Simone Thompson, has modeled for the likes of Marc Jacobs, Calvin Klein, Ugg and Moschino. She was also handpicked by mentor and friend Rihanna for her Fenty Beauty brand. But the successful model turned actress started from very humble beginnings. In fact, it was British model Ash Stymest who kickstarted her career after discovering her at a bus stop in Los Angeles — the city where Woods struggled with homelessness and addiction.

Read More
As her career took off, things were looking great for Woods. But her whole world turned upside down in July 2019 when her dentist noticed suspicious spots in her mouth during a routine dental appointment. After sample results returned, Woods was diagnosed with stage three melanoma. “I just dropped the phone. I couldn’t even cry,” she told CNN. “It was so scary. The first thing I said to my doctor was at least I’m bald already.” RELATED: Model Slick Woods Returns to the Runway Amid Stage 3 Cancer Fight, Says She’s Grateful for ‘Blessings on Blessings’ with her Family and Career

It’s unclear what the status of her cancer is today, but Woods has made a point to keep busy. And now the successful model has had made quite an acting career for herself.

She was the star of a film called Goldie by Dutch writer-director Sam de Jong in 2019, and now she’s in the latest season of the the Emmy-nominated “Black-ish” spinoff entitles “Grown-ish.” You can watch the second half of this season when it premiers on Jan. 18, 2023.

“I thought somebody was punking me,” she said of her reaction to getting the part. “I thought Afrikaa [Afrikaa Johnson, Woods’ manager] got the wrong email.”

When asked if she was taking any acting tips for her friends for the role, Woods’ response was a simple no.

“I didn’t really have to ask for any pointers because my character is not only named Slick, it actually is me,” she said. “They gave me the leeway to switch up things and just kind of just… What’s the right way to say this? They would let me be me.

“I can’t even say it any other way. They’re just like, ‘Okay, this is our research, this is how we see you, but how do you see yourself?’ We kind of met in the middle of that and then got to move forward.”

Needless to say, cancer hasn’t slowed the mother of one down one bit. Still, her cancer journey has been anything but easy.

Treatment for Woods’ stage of melanoma, which had spread to the lymph nodes, usually begins with surgery to remove the original tumor. From there, there are various treatment options including chemotherapy, immunotherapy, targeted therapies or radiation therapy.

“We watch patients very closely. They’re seen by their dermatologist. They’re seen by their surgeon,” Dr. Anna Pavlick, medical oncologist at Weill Cornell Medicine, told SurvivorNet. “Patients with stage three disease probably have a 50/50 chance of being OK with just a surgical resection. However, we now have brand new medicines, or immunotherapy medicines, that can significantly reduce their risk of this ever coming back.

“And many patients who have stage three disease are recommended to undergo preventive immunotherapy.”

RELATED: How Is Melanoma Treated after Surgery? The Landscape of Therapies Explained

Woods underwent chemotherapy treatments for a time, but the side effects causes her to ditch the treatment altogether. Nerve damage caused debilitating neuropathy which led to her losing control of movement in both legs and one arm and she had to rely on a wheelchair for a time.

“It’s just not something I wish on anyone. I just got sicker, and I got weaker,” she said of her chemo.

Melanoma can be fatal without treatment. So, the status of Woods’ health is unclear at the moment, but hopefully she’s found another treatment option that works for her.

Melanoma is a type of skin cancer that starts in the same cells that give your skin, hair and eyes their color. The American Cancer Society says the risk of melanoma increases as people age with the average age of diagnosis being 65, but the disease is not uncommon among those younger than 30. In fact, it’s one of the most common cancers in young adults (especially young women).

The disease can develop from an existing mole or appear as a dark or pink growth on the skin even in places on the body that never see the sun. It’s also known to be the deadliest form of skin cancer.

“Melanomas are the deadliest type of skin cancer because they have a tendency to spread to other parts of the body,” explains Dr. Anna Pavlick.

Paying Attention to Your Skin

Keeping an eye on the moles or growths on your skin is an easy way to keep an eye out for melanoma. Changes to a mole you’ve had for a while or developing a new growth you don’t remembering having on your skin could be signs of this cancer, according to SurvivorNet’s experts.

Dr. Cecilia Larocca of the Dana-Farber Cancer Institute gives SurvivorNet an overview of things to look out for with moles using the ABCDE self-screening method:

Spots on our skin are often harmless, but it’s still important to keep an eye on them and reach out to your doctor if you see any changes or find a growth anywhere on your skin that looks suspicious.

Protecting Yourself from Melanoma

Ninety percent of melanomas are caused by ultraviolet radiation from the sun. This means excessive time in the sun — even as a child  — puts you at a higher risk.

In a previous interview with SurvivorNet, Dr. Dendy Engelman, from MDCS Dermatology in New York, shared the top five things you can do to avoid skin cancer:

Dwayne ‘The Rock’ Johnson, 50, Says His Mom, 74, Is Okay After A Scary Car Accident. She’s Survived Cancer, Attempted Suicide, Another Car Crash And A Tough Marriage