Mom Thought Her Tiny Daughter’s Black Eye Was ‘Just From Her Being A Wiggly Baby:’ It Turned Out To Be Cancer

The parents of Amelia Radford, 8 months, we shocked when she was diagnosed with neuroblastoma. They've since been inspired by her cancer journey to urge people to donate blood. 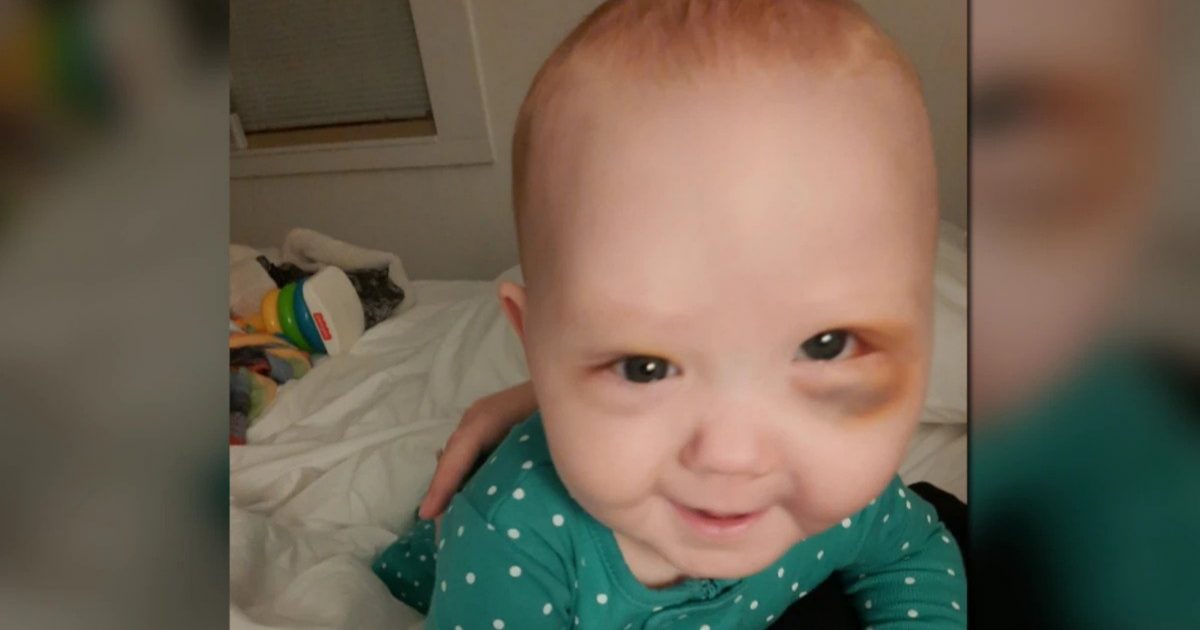 A Family Inspires Others To Save Lives

The family of a toddler who fought through cancer is hoping her story will inspire others to donate blood.

Amelia Radford was only eight months old when she was diagnosed with stage 4 neuroblastoma.

Read More
“Around September of 2020, she got a little bruise under her eye and she was just a wiggly baby so I didn’t think anything of it,” her mother, Danielle Radford, told WDBJ7. But as time went on, a new symptom developed. Amelia’s eye started to drift, so her parents brought her to the hospital. “We went into the hospital thinking maybe she had some sort of head injury, ‘cause all we saw was her eye was misaligned and a bruise,” said Radford. “But we never thought we were going to hear the word cancer.”

That’s when the doctors made the cancer diagnosis.

Neuroblastoma is a type of cancer that develops in neuroblasts, the immature nerve cells around the body. It can be found in the adrenal glands, abdomen, spine, chest, and neck.

Neuroblastoma almost exclusively occurs in children under the age of five. As a child grows, neuroblasts mature into nerves and fibers.

In some instances, neuroblastoma goes away on its own, while those like Eden with stage IV neuroblastoma face more of an uphill battle.

Metastization is the most significant risk for most who are diagnosed with the disease.

There are no known causes of the disease, and there is limited proof that family history makes one more or less likely to develop this form of cancer.

The symptoms will vary based on where the affected neuroblasts are in the body, but generally include:

How Giving Blood Can Save Lives

The treatments worked: the little girl was declared cancer-free in September, 2021.

“She just got to have a little bit of more normalcy when she got that,” said Radford. “And that’s why we have a heart with what the Red Cross does with donations.”

In honor of Amelia’s recovery, the family has begun hosting an annual blood drive. They chose a day in May because that’s when Amelia was able to ring the bell signifying she was cancer-free.

“We hope that she can absolutely stay cancer-free, and she would just have minimal side effects for things and that she can just continue to be an advocate to raise awareness and help people understand what she went through and what other people go through,” said Radford.

The Pain Of A Childhood Cancer Diagnosis

A child’s cancer diagnosis affects an entire family in varying degrees. In an earlier interview, Jayne Wexler, an NYC-based photographer whose son Justice is a childhood cancer survivor, said she saw many couples struggle and eventually break under the intense pressure.

“When we were in the hospital we met a lot of couples, and a lot of people don’t stay together because they can handle this,” Jayne told SurvivorNet. “Fortunately, we [she and her husband] were very strong and we stayed together.”

Jayne pointed out that she and her husband will always have fear for Justice’s health, given everything they have been through, but she said that they work through that fear together. They try to appreciate every moment they have together as a family, and they even attended parenting therapy to get through some of the harder times.

She says, “We have to live each day and be thankful for what we have. And it’s hard to remember that when you’re caught up in – especially in New York City and the craziness – it’s very hard just to sort of enjoy the moment, because we just don’t know what’s going to happen in the future.”

“And we know that, I mean, it could happen to any of us. And so many people have cancer or something terrible happened. So I try to just keep breathing and relax and enjoy my time with Justice,” says Wexler.

Major Cancer Group Calls on Congress to Protect Funding for Pediatric Research We Still Don’t Know How to Handle Teens With Cancer New Hope for Youths with a Rare Type of Cancer Called Epithelioid Sarcoma Cancer as a Young Adult Is Different & In Some Ways More Complex
NOW
PLAYING
Nurse, 44, Grateful For The New Year After Breast Cancer: Family And Community Support Through Treatment
NOW
PLAYING
TV Anchor Jake Tapper's 15-Year-Old Daughter 'Almost Died' After Misdiagnosis, Urges Importance Of Being Your Own Advocate
NOW
PLAYING
One-Year-Old Hallie Will Warm Your Heart, Her Parents' Vigilance Reveals That Birthmark Is Actually Cancer
NOW
PLAYING
Baby Formula Recall Leads To Cancer Diagnosis For Tiny Girl – The Blessing in Disguise
NOW
PLAYING
33-Year-Old Woman Found Protruding Vein On Her Breast After Miscarriage: It Turned Out To Be Cancer
NOW
PLAYING
Shockingly Fired After Diagnosis, Popular TV Host And Loving Father Of Three Receives Outpouring Of Support From Fans