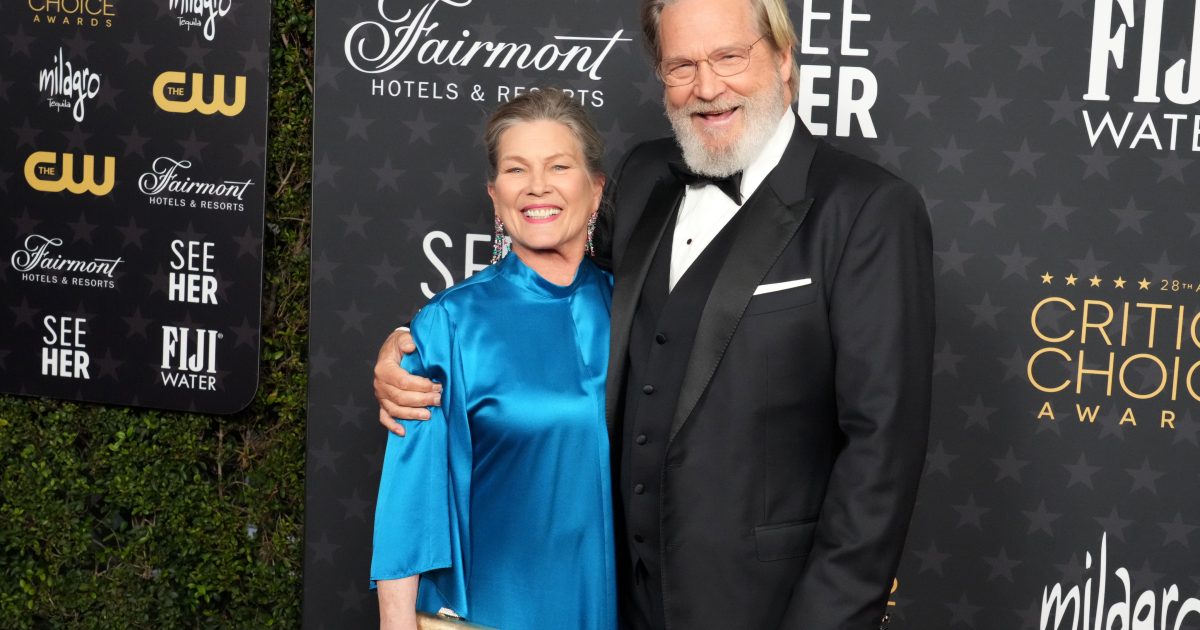 Actor Jeff Bridges, 73, is on a roll; after beating cancer when he was diagnosed with lymphoma, he went on to be honored with a Lifetime Achievement Award from the Critics Choice Awards on Sunday night for his contributions to cinema. He was given the award by his former co-star, actor John Goodman, 70.

In his speech, The Big Lebowski actor – looking dapper in a black suit and bowtie – honored his late father, Lloyd Bridges, who died in 1998 at 85 years old. Bridges shared with the audience and viewers that it was his father’s birthday – and that he was also wearing his father’s cuff links to honor him on his special day.

Read More
Bridges told the room, “It’s my dad’s birthday today, January 15. I’m wearing his cuff links. I wouldn’t be up here without my dad,” says the actor.

He continues, “No, he’s the reason that I’m up here. I can remember him loving showbiz so much, loving acting so much, and as a kid I said, ‘You know, Dad, I’m not sure I wanna be an actor.’ He goes, ‘What are you talkin’ about?’ I said, ‘I wanna do painting maybe, music.’ He said, ‘Jeff, don’t be ridiculous. Being an actor, they’re gonna call on you to do all of those things you’re interested in. And besides that, you’re gonna get to tell all these wonderful stories from all these different perspectives of people that are alive. This is a wonderful profession.'”

Bridges noted how he was so glad he listened to his father, who he lovingly called “the old man.” The actor also praised his family, his siblings, and his wife, Sue. “We’ve been married 48 years,” says the actor with a huge smile. The actor mentioned their daughters, Isabelle, Jessica, and Hayley, adding, “Family — that’s kinda what it all comes down to.”

“It really meant a lot,” Bridges told the press after receiving the award. “The fact that it was his birthday is kind of surreal,” says the actor.

Bridges told the press after winning the award, “You know, I was sick for two years with cancer and Covid…” Bridges says, “I didn’t think I was going to make it all.” He credits his family with their loving support during that time. Treatment methods for lymphoma, like the kind Bridges was diagnosed with, can be approached extra aggressively in some instances. The course of treatment will be determined by your medical team.

Bridges first shared his cancer diagnosis with the world in October 2020 on social media. He announced the diagnosis, writing, “I have a great team of doctors, and the prognosis is good.”

Bridges treated his lymphoma with chemotherapy and regularly kept fans updated throughout his cancer journey with a colorful online journal and on social media. Lymphoma treatments can include (outlined by the Mayo Clinic):

In September 2021, the actor shared on his blog that he’d entered remission. He shared that “the 9” x 12” mass has shrunk down to the size of a marble.” Bridges also suffered after contracting Covid in the midst of his cancer battle earlier this year. “Covid kicked my ass pretty good, but I’m double vaccinated and feeling much better now.”

Bridges says that thanks to his family’s support, he was able to go back to work to continue filming his project The Old Man.

What are the Different Distinctions Among Types of Lymphoma?

The Oscar winner didn’t disclose the type of lymphoma publicly he was diagnosed with, but the two most common types of this disease are Hodgkin and non-Hodgkin lymphoma.

Lymphoma is a cancer of the immune system that affects infection-fighting cells called lymphocytes. And there are more than 40 different types of lymphoma.

“Lymphoma is split up into a number of different categories,” Dr. Elise Chong, a medical oncologist at Penn Medicine, previously told SurvivorNet in an earlier interview.