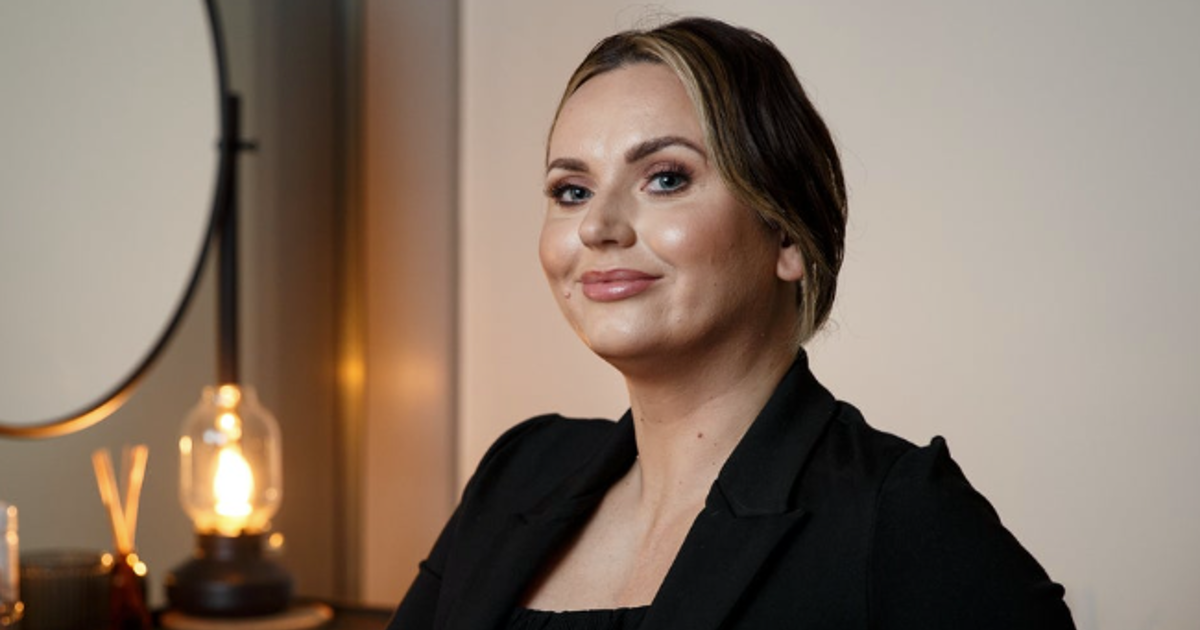 Laura Strathearn, a beauty therapist from Glasgow, Scotland, was recovering from a miscarriage at 33 years old when she noticed a protruding vein on her right breast, a cancer symptom she initially dismissed as hormonal changes from her pregnancy.

Following a talk with her husband Fraser, Strathearn decided to see a doctor and a biopsy later confirmed she had stage 3 breast cancer and it spread to her lymph nodes.

Read More
Now, 35, Strathearn has opened up about her successful battle with the aggressive estrogen hormone-positive cancer that inspired her to spread awareness for the disease and create a specialist beauty service through the charity Maggie’s, a group she counted on for support during her treatments. “My cancer could have gone undetected without the pregnancy. I was told if I’d carried to full term I would have been in hospice care after giving birth,” Strathearn told Newsquest Scotland/ SWNS. “I like to think of our baby as a guardian angel watching over me.” “We were so excited to start a family, but then we were told I’d suffered a missed miscarriage,” she said. “We were devastated and grieving for the baby we never got the chance to meet.”

Twelve weeks into Strathearn’s pregnancy, during a December 2020 check-up, the heartbroken mom-to-be found out her baby had no heartbeat and miscarried just days later.

Then, during her recovery, Strathearn found a prominent blue vein on her right breast. She waited until after Christmas to get the vein checked but was ultimately sent to get checked at the Gartnavel Hospital breast clinic in Glasgow.

“I was sent for a biopsy and a few weeks later I received a call asking me to go to Gartnavel Hospital for the results. I thought I’d be out in five minutes, so when I was told it was cancer, I couldn’t believe what I was hearing,” Strathearn explained. “It turns out that our amazing little baby saved my life. I never expected somebody of my age to receive such news. I felt like the world stood still and I was in a dream, unsure of how to react.”

“The team of amazing consultants and nurses fast-tracked my treatment due to the severity of my illness, and for that, I can never be more grateful,” she added.

Strathearn, who lost her hair, eyelashes, and eyebrows during her treatments, fought the disease through chemotherapy, radiotherapy, 10-hour surgery to remove the tumor, and breast reconstruction. Now, she’s in remission and regularly visits her doctors to make sure the cancer hasn’t returned.

“After about a year of intense treatment, the surgery and the emotional and mental recovery, I took the time to think about how I could use my skills as a force for good and give something back. Identity is so integral to our ultimate well-being, and I fully came to realise this during my treatment.” Strathearn said. “In my days spent at Maggie’s Cancer Centre, I would teach my fellow patients how to draw their brows on and accentuate their eyes through the power of make-up.”

She explained further, “What I’m doing now is my way of giving something back and helping people during what I know will be one of the hardest struggles they will ever face. I can relate to what my clients are experiencing and know exactly how a cancer diagnosis makes you feel. Having beaten the disease, I now want to help others and the feedback has been wonderful.”

“Just being able to give people tips to feel their best is an absolute privilege. I want to stress the importance of knowing and listening to yourself. People should check for cues and never leave something to chance,” she concluded.

When you are diagnosed with stage three breast cancer it typically refers to a relatively large tumor, which may have invaded nearby skin or muscle tissue. It may also mean that lymph nodes near your breast and/or under your armpit are involved.

Stage Three Breast Cancer: What Is It?

Dr. Elizabeth Comen, a medical advisor to SurvivorNet and a medical oncologist at Memorial Sloan Kettering Cancer Center, adds “it also means that most women who’ve been diagnosed with stage three cancer are going to end up needing chemotherapy and if their tumor is hormone receptor positive, likely aggressive hormone therapy, as well.”

There are a variety of fertility preservation options for women who are diagnosed with breast cancer. “It’s incredibly important that patients feel comfortable talking to their doctor about these very personal issues,” says Dr. Elizabeth Comen, a medical oncologist at Memorial Sloan Kettering Cancer Center and a medical advisor to SurvivorNet.

While it is possible to have a baby after going through cancer treatment, that decision will depend on the kind of breast cancer you have and the kind of treatment you received. Dr. Comen advises having a discussion with your doctor early on in your cancer journey so you can explore all your options. These may include egg or embryo freezing.

There are some specific challenges for women with breast cancer: