Cheerful Toddler, 2, Was ‘Covered Head To Toe In Bruises’ And Didn’t Want To Play: It Turned Out To Be Cancer

Now the community is rallying about brave little Wyatt Foster as he battles leukemia. 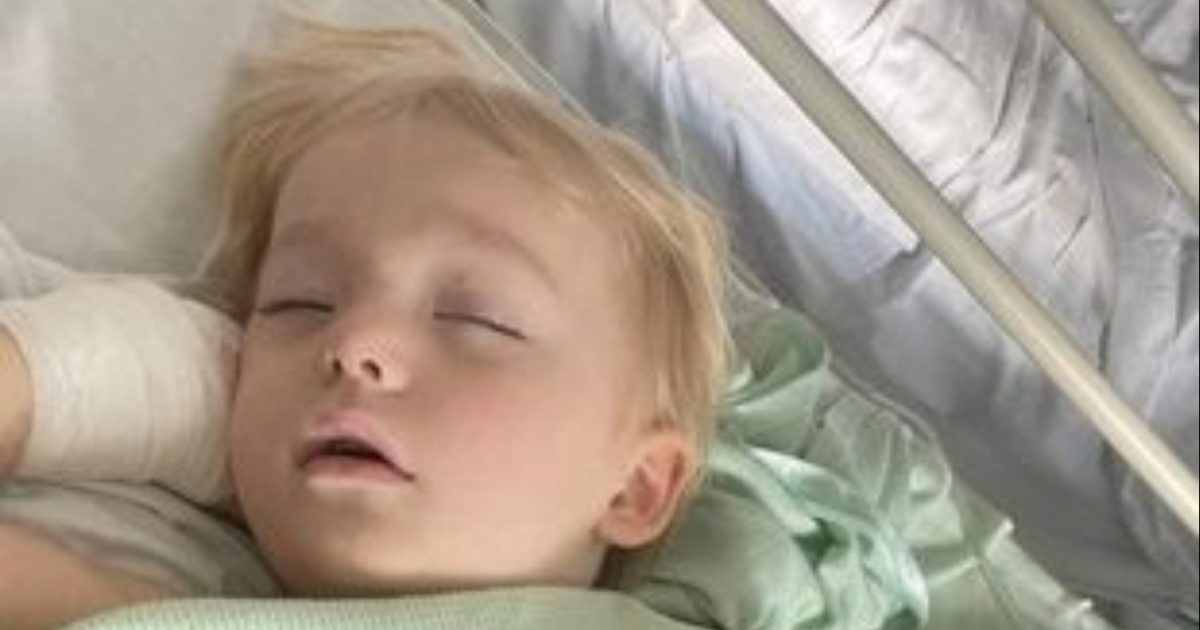 The mother of a two-year-old boy was so devastated by the news that her child had leukemia that she “couldn’t even cry.”

Rhiannon Foster told StokeonTrentLive that her son Wyatt was diagnosed with childhood acute lymphoblastic leukemia on July 13. She had brought him to hospital when she noticed a change in his behavior.

Read More
“He was very down and he didn’t want to play which is very unusual,” she said. “When he got up on Tuesday, July 12, I noticed he was covered in bruises all over his neck, arms and legs. I knew it wasn’t right.” After Foster called emergency services, she said she was told to wait for an ambulance, but none ever came. Instead, she took him to the hospital herself, where he was quickly admitted and had blood drawn. “I was just about to go to sleep at 12.30am when a consultant and nurse came to see me and told me Wyatt had got leukemia,” said Foster. “I was shocked and couldn’t get any words out. I couldn’t even cry because I was in shock. It’s really upset me.”

What You Need To Know About Leukemia

Leukemia is the most common cancer in children and teens. It accounts for almost 1 out of 3 pediatric cancers. Most of these cancers are a type of leukemia called acute lymphocytic leukemia (ALL), which starts in the early forms of white blood cells called lymphocytes. ALLs make up about 3 out of 4 cases of childhood leukemia. Acute myeloid leukemias (AML) make up most of the remaining cases, and chronic leukemias are rare in children. AMLs begin in the myeloid cells that normally form white blood cells (other than lymphocytes), red blood cells, or platelets.

“When we talk about leukemia, that means one of the types of white blood cells is growing out of proportion to the others — and in general, that’s the definition of cancer,” Dr. Nina Shah, a hematologist at the University of California San Francisco, told SurvivorNet in a previous conversation about how blood cancers begin.

“One cell got really selfish and decided that it needed to take up all the resources of everybody else — and in doing so, took up space and energy from the rest of the body,” she explained. “So in this case, some of the white blood cells will start to grow out of proportion, and that’s what’s known as a leukemia. Now, if it’s a kind of leukemia that grows really, really quickly, we call it an acute leukemia. And if it’s a kind of leukemia that grows over several years, we call it a chronic leukemia.”

Pediatric ALL is most commonly diagnosed in early childhood, between the ages of 2 and 5, while AML tends to be more spread out. It is slightly more common in the first 2 years of life and during teenage years.

What Is Acute Lymphoblastic Leukemia ALL?

Reason For Hope For Childhood Cancers

Treatment advances in recent decades have lead to 84 percent of children with cancer now surviving five years or more, according to the American Cancer Society. This is up from 58 percent from the mid-1970s.

But according to the National Pediatric Cancer Foundation, more than 95 percent of childhood cancer survivors have significant health-related issues because of the current treatment options, and only 4 percent of the billions of dollars spent each year on cancer research and treatments are directed towards treating childhood cancer in the United States. Since 1980, fewer than 10 drugs have been developed for use in children with cancer while hundreds of drugs have been created exclusively for adults.

Dr. Elizabeth Raetz, director of pediatric hematology and oncology at NYU Langone’s Perlmutter Cancer Center, reminded us in a previous interview that there is still reason for hope.

“There are also targeted treatments and different immunotherapies that have been studied in adults and have now moved into clinical trials for children and there has been a great deal of excitement in the community about that,” Dr. Elizabeth Raetz told SurvivorNet.

A Community Comes Together

Although Wyatt is receiving treatment, things are still difficult for his 31-year-old mother, who has four other children and has taken time off work to care for her son while he undergoes treatment. Her husband, Sam, is travelling between two cities so he can care for their other kids while still visiting Wyatt.

“It’s been a bit hectic for us. I don’t know how I feel at the moment, it’s still sinking in. I was crossing everything that they had made a mistake and it wasn’t leukemia,” said Rhiannon. “Hopefully next week, depending on how he reacts to chemo, we should be able to come back to our own hospital in Stoke-on-Trent which will be a bit easier. It’s going to be a very tough road with a lot of hospital trips. It’s going to put a strain on the family. My oldest son is not taking this well. He understands Wyatt is very poorly and is struggling with me not being at home. With the rising costs of fuel, it’s very hard for us to keep up. I am gobsmacked and can’t believe how quick and fast everybody has got behind us. Everyone has been really supportive.”

A GoFundMe page has been set up for the family by friends to help them keep up with expenses while Rhiannon is off work and caring for Wyatt.