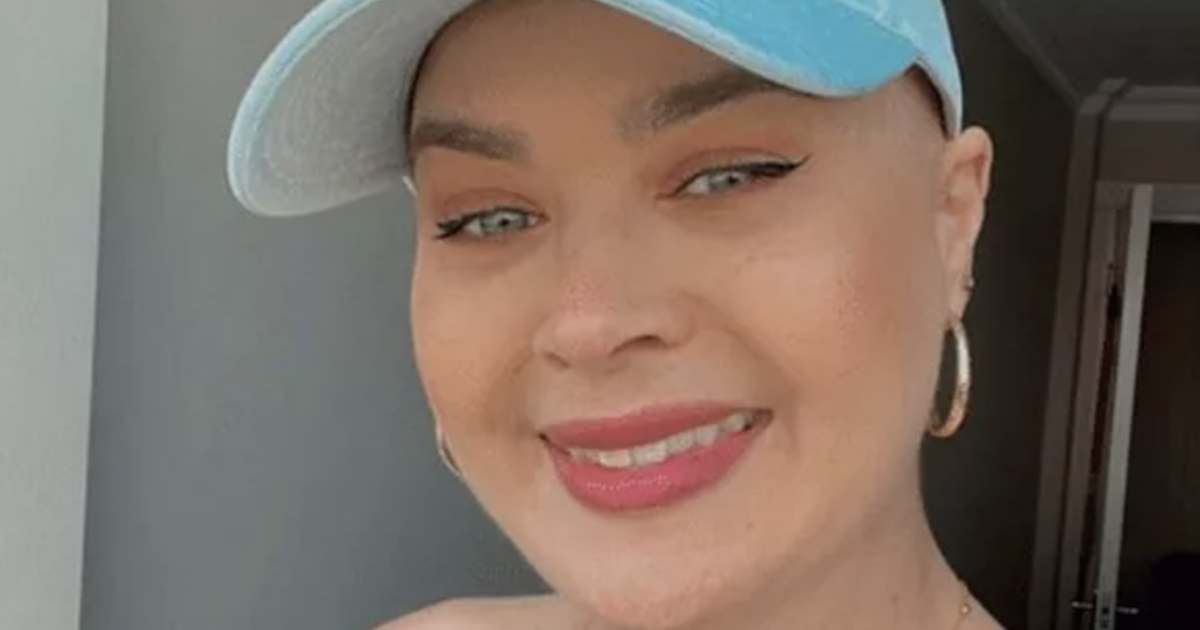 Kelli Zanelato, a 35-year-old mom living in London, was diagnosed with bowel cancer in 2020 after being initially misdiagnosed with IBS after changes to her bathroom habits; she was going to the bathroom far more often.

Changes in stool are a common sign of bowel cancer, which can also be called colorectal cancer.

Read More
Zanelato is staying positive throughout her cancer journey. She says, “No matter what you’re facing, have faith and live your life today without worrying about the future.”

“I’m here to tell you that no matter how hard life is, you can always fight back.”

The mom continues, saying, “I’m here to tell you that no matter how hard life is, you can always fight back. It makes you unique. It’s certainly made me appreciate life more and be grateful for the little things.”

Bowel cancer is a general term for cancer that begins in the large bowel, and this type of cancer can also be called colon cancer, rectal cancer, or colorectal cancer. According to the American Cancer Society (ACS), colorectal cancer is the third most common cancer diagnosed in both men and women in the United States.

Zanelato’s first symptom was an increase in trips to the bathroom. Express.co.uk reports that the Londoner says,  “My journey [with cancer] started two years ago in August 2020 when I was diagnosed with stage three bowel cancer.”

Zanelato says she was going to the bathroom many times in a day, and so she sought medical care. But when she did, she was dismissed. She recalls, “I went to the GP, but it was dismissed as irritable bowel syndrome (IBS).”

She that over the course of three months, she returned to the doctor and they referred her for different scans and tests. “Everything came back normal,” she says, “but I was fed up of making frequent trips to the loo.”

Zanelato then asked her GP for a colonoscopy. The results showed that she had “aggressive” bowel cancer. She says, “I was only 35, my whole life came crashing down – at that time my little boy was only 18 months.”

Related: Looking for Polyps During Colonoscopy

Colonoscopies look for polyps – small white growths that are most often pre-cancerous – on the colon. In an earlier interview with SurvivorNet, a colorectal surgeon at Cedars-Sinai, Dr. Zuri Murrell, explains what happens during a colonoscopy. He says, “People often ask me, what do you do when you have a colonoscopy? What’s done? Do you do biopsies? So a colonoscopy can be done for many things. But when we’re looking at a colonoscopy for colorectal cancer screening, what we do is we’re looking for polyps, which are these small growths.”

Dr. Murrell explains, “When we see a polyp, we actually physically take the polyp out through the colonoscope. What does that mean? That means we basically put a wire through with a little bit of a little flange at the end and we pull the polyp out. Now, note there is no pain with that.”

Murrell says the polyp is then sent to a lab to be examined, and the results will come back in five to ten days, showing if there is cancer.

Treatments for bowel cancer can include surgery, chemotherapy, and radiation therapy. If the bowel cancer is detected early, treatment can be fully effective and stop the cancer from recurring. To treat her cancer, Zanelato underwent surgery and had chemotherapy.

“To make the news so much worse, it was spreading very fast to my ovaries, uterus, colon, rectum, gallbladder, and spleen,” she said.

In an earlier interview with SurvivorNet, Dr. Paul Oberstein, the director of the Gastrointestinal Medical Oncology Program at NYU Langone’s Perlmutter Cancer Center, shares some common symptoms of bowel cancer. Dr. Obserstein says these can include:

Getting a Second Opinion

Misdiagnoses – like the one that Zanelato experienced when she was incorrectly diagnosed with IBS – are not uncommon.

Zanelato was wise to ask for a colonoscopy and continue to seek care from her doctor. If you’re experiencing symptoms that might be caused by cancer, it’s critical to know for sure whether or not you have the disease. To do that, you should always get multiple opinions on your diagnosis.

As her case shows, doctors are not always in agreement about whether your symptoms might merit further testing and whether specific treatment methods might work best for you.

When it comes to getting a second opinion, Cindi Cantril, the regional director of cancer support services and patient navigation for Sutter Bay Medical Foundation in the Bay Area, says in an earlier interview with SurvivorNet, “Many patients say to me, ‘Well, I don’t want to upset my physician.’ And I tell them, ‘It’s really not about upsetting your physician. It’s about advocating for yourself. It’s about seeking out all the information you need to make an informed decision,'” she says.

Cantril says, “You, as the patient, know your body better than anyone. And one of the things that you can do is to say to your provider, or to your healthcare advocate, ‘I need a second opinion.'”

The Importance of Second Opinions for Cancer Diagnosis and Treatment