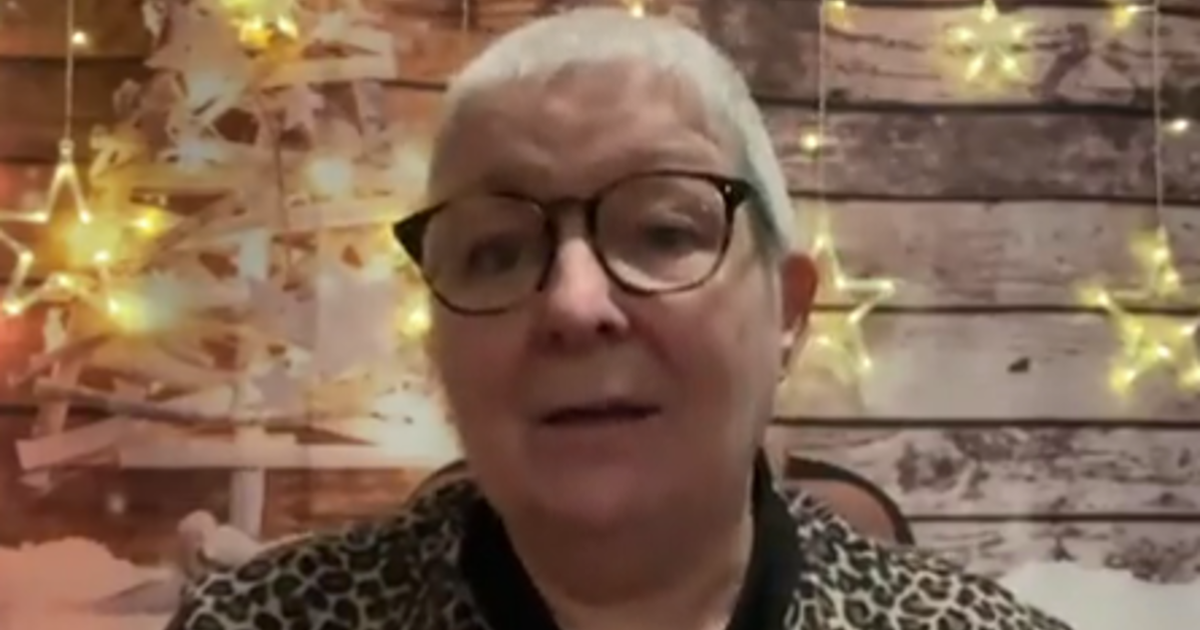 Scottish stand-up comedian Janey Godley’s ovarian cancer has returned after she received the “all-clear” earlier this summer but despite her ongoing battle with the disease, the 61-year-old has vowed to her fans she’ll do a final tour.

The cancer warrior, who has been battling the disease with humor and positivity, promised her fans in a video shared on Twitter this week that her Not Dead Yet Tour will begin in February 2023.

Godly, who described her upcoming “fabulous tour” as going to be her “dream come true,” stressed how thankful she was for the support she’s been receiving from family, friends, and fans.

Hello everyone – an update and just to let you know I am looking forward to the tour on Feb-March. Thanks to everyone supporting me pic.twitter.com/YbJFHuxZHo

For Janey’s ovarian cancer treatment, she also had to undergo a hysterectomy, a surgical procedure that removes the uterus. In addition to the physical loss of the womb, the emotional repercussions can sometimes also be extensive.

Related:  Woman Has Hysterectomy At Age 22 After Her ‘Irritable Bowel Syndrome’ Turned Out to be Ovarian Cancer

Janey’s cancer was stage 3, so she needed to start treatment right away, but eventually had to have that mandatory surgery as well. What matters, however, is that she found her cancer in time, as ovarian cancer is often difficult to diagnose.

Initially, Janey was suffering from a bloated stomach, back and stomach pain, frequent urination, and lack of appetite.

“A patient can feel relatively normal and suddenly wake up with abdominal distension and symptoms that are related to ovarian cancer,” Dr. Jeanne M. Schilder, a gynecologic oncologist at Indiana University Medical Center, tells SurvivorNet.

A good rule of thumb is to go get checked out for any lingering symptoms that don’t get better over the course of a couple of weeks.

Women know their own bodies better than anyone. So if you feel like something just isn’t right it’s a good idea to see your primary care physician, at least to start. Your doctor should get your medical history and the symptoms you’re concerned about, and do a physical exam.”

As with any type of cancer, the earlier that you can get a diagnosis, the better off you will be.

Janie got the “all clear” this summer, which led her to grow her locks into a short, white ‘do. However, the cancer was recently found in her abdomen and she’s now undergoing more treatment.

Ovarian cancer has been called the “cancer that whispers,” because women often don’t experience symptoms until their cancer has already reached its late stages. The symptoms that do appear at first are hard to identify as cancer. This subtlety of symptoms makes it essential for women to know the warning signs, and report them to their doctor, SurvivorNet’s experts warn.

With ovarian cancer, chemotherapy is usually the first stage of treatment, but as far as staging your actual cancer? It’s a little more difficult to tell until your doctor performs a surgery.

For ovarian cancer, gynecologic oncologists recommend a staging procedure after a diagnosis when they have evidence that the cancer may be early or limited, which has to do with the location of the tumor. Based on where the cancer is found, it will be assigned a stage.

How Do I Know The Stage of My Ovarian Cancer? Staging Surgery Determines Spread

We spoke with Dr. Amanda Fader, who further describes the notion of staging your ovarian cancer through surgery, that determines what, if any, cancer has spread.

“If it’s remained in the ovary where it was initially found or developed, then the cancer is Stage 1,” says Dr. Amanda Fader, vice chair of gynecologic surgical operations at Johns Hopkins University in Baltimore, tells SurvivorNet.

“But if the cancer has started to spread to other organs or through the lymph nodes to other parts of the body, then it would be identified as Stage 2, 3, or 4,” Dr. Fader adds.

The Stages of Ovarian Cancer

When doctors have evidence before the surgery, such as from imaging tests, that the tumor may be limited to the ovary, they will usually recommend a staging procedure. During that operation, doctors remove all or part of the ovary with the tumor and send it—while the patient is still asleep on the operating table—to a pathologist who will examine the tissue and identify the type of tumor so doctors can decide how best to treat it.

If the tumor is determined to be benign, the surgery can end. Otherwise, more extensive surgery is usually performed. Prior to the surgery the patient and her doctor would have discussed the various possible findings, so that depending on the result of the ovarian biopsy, the surgeon knows what the patient’s wishes are and how to proceed. “We would have made these decisions ahead of time through our preoperative counseling,” explains Dr. Fader.

If the tumor is malignant—ovarian cancer—“then we usually do a hysterectomy and remove the opposite ovary, too, in case it’s involved with the cancer. We also remove the omentum—an apron of fat in the abdomen. It has no known function, like the appendix, but can be involved in many ovarian cancer cases. And we’ll do several biopsies around the abdomen and pelvis, including biopsies of the lymph nodes and peritoneum (the tissue lining of the abdomen).”

These biopsies will determine whether the cancer has spread and if so, how far.

How To Manage A Recurrence Of Ovarian Cancer

Eighty percent of women with ovarian cancer enter into remission. However, during the next five years, 70 to 80 percent of those women may have a “recurrence,” when the cancer comes back, according to Dr. Beth Karlan, a gynecologic oncologist at the UCLA Medical Center whose skill as a clinician is noted among her colleagues. The probability of recurrence is, without question, daunting, but there are exciting new options for treatment.

What Is Happening During a Recurrence?

To explain what’s happening in your body in the most basic terms, recurrence often occurs because some cancer cells are left behind after treatment, and, over time, they grow larger. Your cancer may have specific features which means these cells just didn’t respond well to treatment.

Women dealing with recurrence will likely need to go through chemotherapy or surgery again. And there may well be a decision to add a drug that cuts off the blood supply to tumors (Bevacizumab) or a class of drugs called PARP Inhibitors which help prevent cancer cells from repairing themselves at the genetic level.

According to Dr. Karlan, the type of treatment recommended for recurrence can depend on a number of factors:

If a woman’s time in between remission and recurrence is more than six months then the ovarian cancer is categorized as “platinum-sensitive” (that is, responsive to a platinum-based chemotherapy treatment) and that patient will be treated with chemotherapy and another platinum-based drug.

However, if the recurrence time happens less than six months into remission, the ovarian cancer is classified as “platinum-resistant.” At that point, women are usually treated with another type of chemotherapy and encouraged to enter into a clinical trial. Alternatively, women might be platinum refractory, which refers to disease that grows while the patient is on chemotherapy and has a particularly poor prognosis.

There is growing data to support the idea that PARP Inhibitors, the class of drug which inhibits cancer cells from repairing their DNA can benefit a wide swath of women. PARP inhibitors are especially beneficial for women who have genetic testing to discover that they have a mutation called BRCA.

For women with ovarian cancer who have had a recurrence and responded to platinum-based chemotherapy, Lynparza, Zejula and another PARP inhibitor called Rubraca (rucaparib) are FDA approved for use as a maintenance therapy, regardless of whether a woman has a BRCA mutation or HRD.

For some women who have had prior chemotherapy treatments, Rubraca, Zejula or Lynparza may also be options. These uses are based on factors such as number of prior therapies and BRCA mutation or HRD.

The different PARP inhibitors do have some varying side effects, which women and their doctors need to evaluate carefully. It’s important to ask your doctor if he or she has experience managing the side of effects for the various PARPs. Some of these considerations are explained here.

Oncologists can also use a tactic to determine if there is something called “microsatellite instability” in the tumor, which can indicate whether immunotherapy is an option, according to Karlan. Trying to activate the immune system to fight cancer through one of the approved immunotherapy drugs is not yet proving very effective for ovarian cancer, but there are interesting clinical trials going on which combine immunotherapy with other agents.

In the rounds of treatment after a recurrence, Karlan says that experienced doctors look at clinical trials to see if a woman’s disease has some of the features which might make her a potential candidate for novel agents or combinations.

Participating in a clinical trial can provide benefits while also providing vital information to the entire scientific community about potential future treatments.

Dr. Karlan explains that oncologists may well treat women whose cancer comes back “three, four five, six, seven or eight times” and often it’s during treatment for their fifth or six recurrence that they might go back into remission.