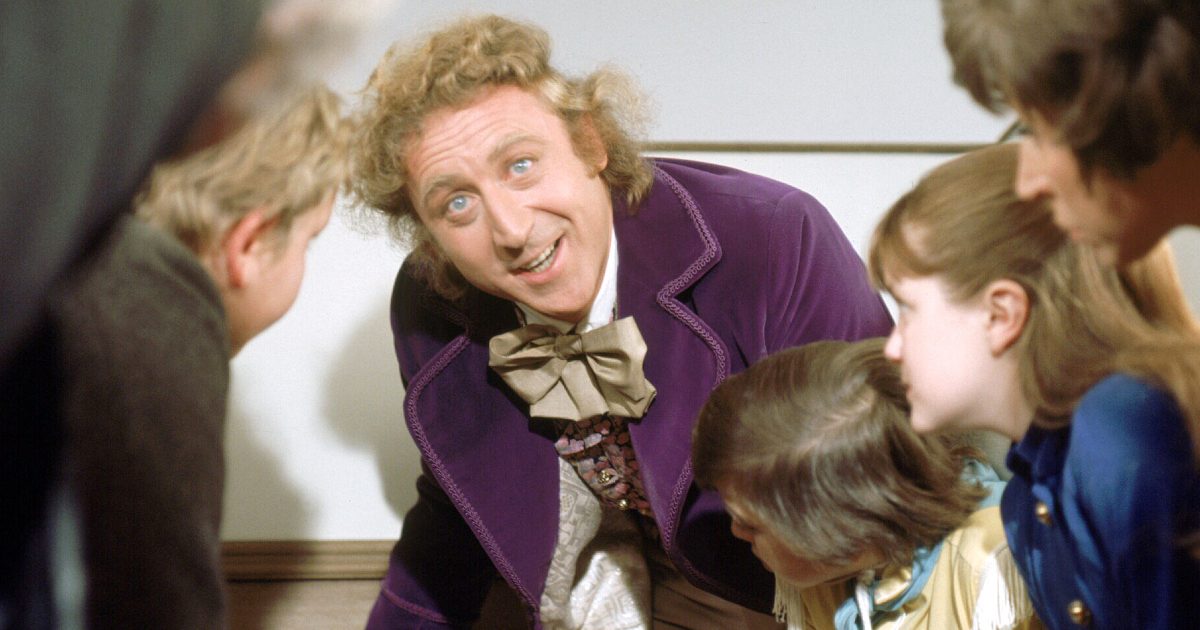 Comedic actor Gene Wilder, born as Jerome Silberman in 1933, will always be remembered for starring as Willy Wonka in the 1971 film Willy Wonka & the Chocolate Factory.

The successful actor, film director, screenwriter, and author passed away at the age of 83 on August 29, 2016 due to complications from Alzheimer’s disease. His death occurred more than a decade after battling non-Hodgkin lymphoma in the 1990s, which he fought off with chemotherapy and a stem-cell transplant before going into remission.

Read More
Wilder, also known for his work co-writing the 1974 American comedy horror film Young Frankenstein and directing The Adventures of Sherlock Holmes’ Smarter Brother in 1975, had his first two marriages with Mary Mercier and Mary Joan Schutz end in divorce before meeting Saturday Night Live comedienne Gilda Radner, whom he married in 1984. The beloved actor was no stranger to disease before he was diagnosed with non-Hodgkin’s lymphoma, as his wife Radner was previously diagnosed with stage four ovarian cancer. In 1989, Radner passed away after her cancer had metastasized through her body. Following, her death, Wilder took a half retirement until he married hearing specialist Karen Boyer in 1991. Although Wilder was married four times, he only had one daughter, Katharina, who he adopted with Mary Joan Schutz. Wilder, who discovered he had non-Hodgkin’s lymphoma in 1999, was treated at Manhattan Sloan-Kettering Cancer Center to prevent the disease from returning, according to reports. It is only known that the actor went into remission after undergoing chemo and a stem-cell transplant.

Following his successful battle against non-Hodgkin’s lymphoma, Wilder from Alzheimer’s—something that wasn’t revealed to the public until his death. Two years after he passed away, his wife Karen Wilder recounted caring for him with Alzheimer’s in ABC News exclusive essay.

“I never pictured myself marrying a movie star. I also never saw myself spending years of my life taking care of one. But I’ve done both. Love was the reason for the first. Alzheimer’s disease, the second,” Karen wrote.

Signs of Alzheimer’s, described by the National Institute on Aging as “a brain disorder that slowly destroys memory and thinking skills, and, eventually, the ability to carry out the simplest tasks” that affects more than 6 million people across the U.S., first started showing up in Wilder when he had become mad at his grandson, perceived objects as being closer than they appeared, and forgetting the name of one of the movies he acted in, his wife explained.

“When we finally got him tested and the diagnosis came back, it was Alzheimer’s. Unlike other diagnoses, even some cancers, this one offers not even a shred of hope for survival,” Karen said. “The synapses of his brain were getting tangled and the result would be a steady and terrible progression of losses — memory of course, but also motor control, to the point where eventually his body would simply forget how to swallow or breathe.”

She continued, “My husband took the news with grief, of course, but also astonishing grace. I watched his disintegration each moment of each day for six years. One day, I saw him struggle with the ties on his drawstring pants. That night, I took the drawstrings out. Then his wrist was bleeding from the failed effort of trying to take off his watch. I put his watch away.

“I was determined to keep Gene with me –- in California and, finally, at the home we’d made together in Connecticut. We still managed to have some good times and to laugh, even at the ravages of the disease that was killing him.”

Karen has since been spreading awareness for the incurable disease.

“So, I have a responsibility, I think. Neither my love, nor science, could save my husband’s life. But it’s my most profound hope that through research and awareness, others may be spared the experience that killed Gene — and could have killed me, too,” she said.

Lymphoma is a cancer of the immune system, which begins in a specific kind of white blood cell called a lymphocyte, located in the body’s lymphatic system. It is one of about 100 different types of blood cancers that affect nearly 200,000 Americans every year.

Related: Celebrities, Musicians and More We Loved and Lost to Cancer in 2019

In cases of lymphoma, the lymphocytes multiply and build up in the lymph nodes and other tissues, making it more difficult for your immune system to launch an effective attack against invading germs.

As a result, the body becomes more prone to infections and other illnesses.

Doctors make a determination by examining the white blood cells within the body.

What is Non-Hodgkin Lymphoma?

Currently, there’s no test to screen for lymphoma. Most lymphomas that are caught in the early stages are detected because a person sought medical treatment for some other issue.

Until an effective screening test does become available, you can increase your odds of finding lymphoma early by knowing whether you’re at risk, and staying alert for symptoms.

You might be at higher risk for this cancer if you:

What kind of treatment you are given for non-Hodgkin lymphoma will depend on what type of disease you have.

One way doctors divide up these cancers is based on how fast they’re likely to grow and spread. Another way to classify non-Hodgkin lymphoma is based on the type of cell it affects. All of these cancers involve lymphocytes — white blood cells that help your immune system fight off germs and get rid of abnormal cells. However, lymphocytes come in two types: B cells and T cells.

Diffuse large B-cell lymphoma is the most common subtype of non-Hodgkin lymphoma.

Non-Hodgkin Lymphoma Treatment: Finding the Right Fit for You

If your cancer is more aggressive, whether it’s T-cell or B-cell, you can expect to get chemotherapy. Chemo may be part of a cocktail of drugs doctors call R-CHOP. That’s short for:

These drugs work synergistically, going after your cancer in different ways to treat it more effectively. You’ll get them once every three weeks. All of the drugs are given through a vein in your arm, except for prednisone, which comes as a pill.

Radiation can also be used in patients who have relapsed to ease symptoms or target specific areas.

About 60% of patients who get the R-CHOP chemo combination will be cured. For the other 40% who need additional treatment, your doctor may recommend a different kind of chemotherapy than you had the first time.

Doctors follow up that second round of chemo with a stem cell transplant, which uses a patient’s own stem cells, taken before treatment and given back afterwards.

There are several treatment options available if non-Hodgkin lymphoma returns, and the most common first treatment after relapse is another round of chemotherapy. However, for patients whose cancer does not respond well to chemo, doctors may explore other therapies.

When non-Hodgkin lymphoma comes back after remission or doesn’t respond to chemotherapy or targeted therapy, the treatment conversation may shift to a stem cell transplant.

It’s a way for you to get high-dose chemotherapy — enough to wipe out a lot of your lymphoma cells — and then replenish the healthy blood cells the chemo destroys. A stem cell transplant is a very efficient cancer treatment, and it can even cure the disease, provided that you’re a good candidate.

A stem cell transplant is most commonly used to treat relapsed diffuse large B-cell lymphoma, but some people with other types of lymphoma, including mantle cell lymphoma, will get an autologous stem cell transplant as soon as they go into remission or get close to it. It’s also an option for some people with more aggressive disease, or those who haven’t responded well to past treatments.

Another option for people whose non-Hodgkin lymphoma has recurred or did not respond to treatment may be CAR T-cell therapy.

CAR T-cell therapy is sometimes called a “living drug,” because it uses your own immune cells, which are reprogrammed to attack a unique aspect of your cancer. Essentially, these re-engineered cells take over the cancer-fighting work of your immune cells.

The entire process involved in getting CAR T-cell therapy can take a few weeks. It starts by drawing your blood and separating out the T cells.

Then, using a virus that’s been modified to be harmless, the T cells are genetically engineered to produce proteins called chimeric antigen receptors (CARs) on their surface. These receptors will enable the cells to recognize and attach to a matching protein, called an antigen, on the tumor cell – just as a key fits into a lock. The process primes the T cell to recognize cancer and fight it.

Rituxan is approved for people with three types of B-cell non-Hodgkin lymphoma:

You may get Rituxan as the very first treatment for non-Hodgkin lymphoma, or after you’ve already been on chemotherapy. Your doctor can prescribe this drug on its own (which is called monotherapy), or together with chemotherapy (which doctors call chemoimmunotherapy).

Answering Your Questions About Non-Hodgkin Lymphoma

What Kind of Lymphoma Do You Have? Why Your Type Matters Finding Lymphoma Early: Do you Know the Symptoms and Risks? What Kind of Biopsy Do You Need? What Does It Mean to Have Advanced-Stage Lymphoma? How Effective is Radiation Treatment for Non-Hodgkin Lymphoma?
NOW
PLAYING
Zanubrutinib May Delay Disease Progression in Chronic Lymphocytic Leukemia & Small Lymphocytic Lymphoma
NOW
PLAYING
Is A Restrictive Neutropenic Diet Really Necessary After a Bone Marrow Transplant?
NOW
PLAYING
For Some Advanced Breast Cancers Powered By Estrogen, The Drug Camizestrant Shows Promise Actually Degrading The Hormone
NOW
PLAYING
New Data: The Drug Ibrutinib May Help Some Younger Mantle Cell Lymphoma Patients Avoid A Stem Cell Transplant
NOW
PLAYING
Changing Landscape Of Ovarian Cancer Treatment: PARP Inhibitor Drugs Withdrawn For Some Indications
NOW
PLAYING
Newly FDA-Approved Drug Elahere May Be Effective Treatment For Patients With A Particularly Aggressive Form Of Ovarian Cancer