Sore Throat For Mother Of Three, 51, Turns Out To Be Tonsil Cancer That Left Her ‘Microwaved’ 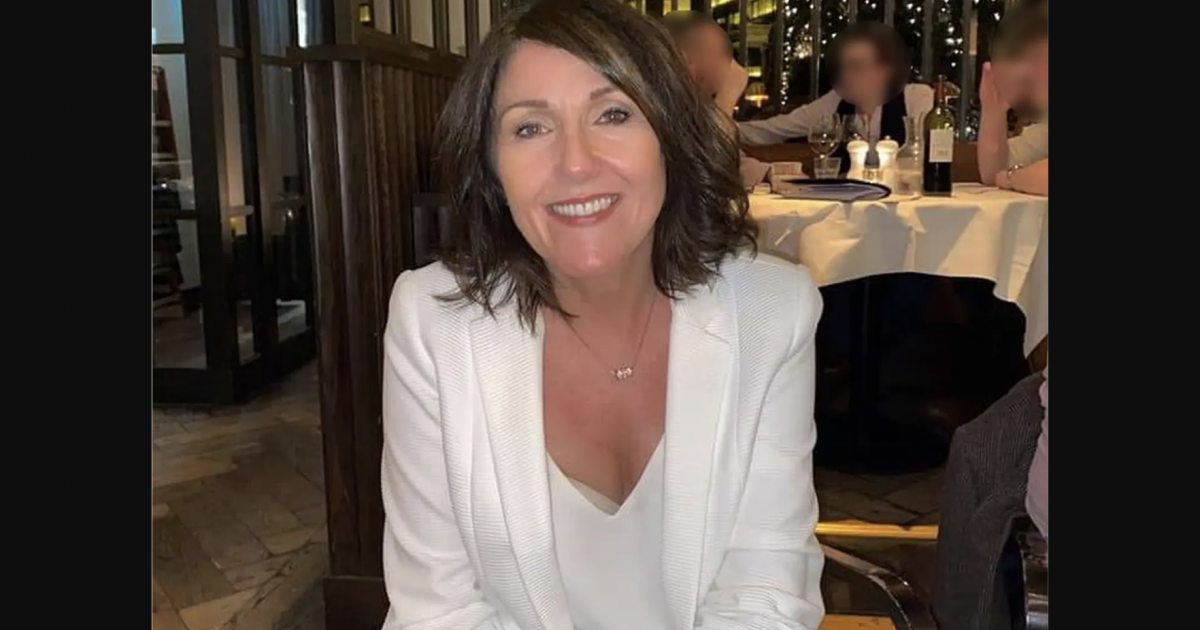 Understanding The HPV Link To Cancers

People don’t often associate a sore throat with anything serious. But for Lisa Gooddy, 51, it served as a warning sign for her tonsil cancer.

Gooddy grew up having chronic sore throats. When a white patch appeared on her tonsil about a year before her diagnosis in 2019, however, she was inclined to see her general practitioner.

Read More
“There was a white patch on my tonsil and I’ve had tonsil stones in the past,” Gooddy told Kennedy News. “But, unfortunately, I wasn’t referred at that point, as they thought it was tonsil stones.” Sadly, the “chatty” customer service agent’s symptoms only progressed until her voice grew weaker. “We’d have meetings, and I actually couldn’t go to some of them one day. I felt absolutely drained, and I thought, ‘I can’t speak to anybody,’” she explained. “This must have been the effect of the cancer on my vocal cords.”

Doctors tried to prescribe her antibiotics, but they didn’t help. Eventually, her lymph nodes became increasingly swollen too. It wasn’t until the mother of three saw a specialist in 2020 that she received an accurate diagnosis: stage two tonsil cancer.

“I would like to say I am quite an optimistic person, although no one wants to hear those words,” she said of learning her diagnosis. “But, I think I’d had issues for so long, it wasn’t a surprise because I knew there was something wrong.”

RELATED: Throat Cancer Is Increasing in the United States, New Research Suggests; Did You Know A Virus That Causes It Can Be Prevented With a Vaccine?

To treat the 2.4-inch lump on her tonsil, which she says was caused by the human papillomavirus (HPV), Gooddy underwent chemotherapy and radiation. Radiation, in particular, has left her with very troublesome side effects.

“Somebody said that [radiation is] actually like you think about your mouth or skin being microwaved, basically that’s what’s happening,” she said. “One of the really awful known side effects of the treatment is that you don’t have any saliva glands and constantly have a dry mouth.”

“Having a dry mouth all the time is really awful. It affects your speech, ability to eat, talk. I can’t lick an envelope.”

Gooddy has also been forced to take tablets to keep her mouth from getting too dry and restrict her diet. Since her treatments, she’s lost lost about 42 pounds.

“It affects so many things: If I’m going out, say to a restaurant, there potentially could be nothing on the menu that I could eat because I can’t have pepper,” Gooddy said. “I ordered broccoli in a restaurant but it was al dente, and because I was hungry, I swallowed it, but I couldn’t breathe, so my husband had to do the Heimlich maneuver on me because it was lodged in my throat.”

She still struggles with the day-to-day effects of cancer treatment, but Gooddy is happily in remission as of June. And as a tonsil cancer survivor, she wants to warn other people to pay attention to any possible signs of cancer in their bodies.

“Check your mouth — it’s a cancer that people don’t seem to know about, and it takes two minutes to check your mouth, throat and neck for any changes,” she said. “And if there’s any sore areas or those that look different, go and see your GP and dentist, and if they don’t think it’s anything, but you’re still not happy, ask for a referral — don’t be put off.”

The most common symptom of tonsil cancer is an enlarged tonsil, according to Memorial Sloan Kettering Cancer Center. If both tonsils are swollen or enlarged, the problem is less likely to be tonsil cancer, but you should still bring up the change to your health with your doctor.

Other tonsil cancer symptoms include:

Tonsil cancer is becoming increasingly common in the United States. It is often caused by past infection with the human papillomavirus (HPV).

Oral and throat cancers, for example, are both on the rise in young, non-smoking adults, and Dr. Allen S. Ho,  an oncologist at Cedars-Sinai Medical Center, says HPV is the cause.

Learning about the HPV Vaccines

Thankfully, we have three types of HPV vaccines – Gardasil 9, Gardasil and Cervarix. All three went through years of extensive safety testing before being approved by the U.S. Food and Drug Administration (FDA), and the CDC reports that HPV vaccination has the potential to prevent more than 90 percent of HPV-attributable cancers.

And while Dr. Susan Vadaparampil, the associate center director of community outreach, engagement and equity at Moffitt Cancer Center, previously told SurvivorNet there are few medical strategies that totally prevent against getting cancer in the first place, she emphasized that data from countries with high rates of vaccine coverages shows decreases in HPV-related pre-cancer and cancer – particularly so in the case of cervical cancer.

Who Should Get the HPV Vaccine?

According to the CDC, the HPV vaccine is recommended for all preteens (both girls and boys) 11 to 12 years old in two doses administered between six and 12 months apart. The series of shots can also be started as early as 9 years old.

Additionally, the HPV vaccine is sometimes administered in adults up to 45 years old, but it is not recommended for everyone older than 26. Still, a person older than 26 might decide to get vaccinated after talking to their doctor about possible benefits even though it is less effective in this age range since more people have already been exposed to HPV by this time.

What Are The Possible Side Effects?

With more than 120 million doses of HPV vaccines distributed in the United States, there is plenty of data showing the safety of HPV vaccines. But, like any vaccine, there are possible side effects.

According to the CDC, the most common side effects are pain, redness or swelling in the arm where the vaccine was given, dizziness, fainting (which is more common among adolescents after receiving any vaccine), nausea and headache. With the exception of fainting, there have been no confirmed adverse HPV vaccination side effects occurring at higher than expected rates.

Anaphylaxis, a serious allergic reaction, occurs very rarely after any vaccine – including HPV vaccines. The CDC says that anaphylaxis following vaccination in the U.S. has a reported rate of three cases per one million doses administered.

Doctors say the benefit of having your child get the HPV vaccine outweighs any possible concerns, but timing is important. Duffey-Lind says the immune response is “significantly stronger” in those vaccinated before age 15.

“The greatest benefits for HPV vaccination occur when adolescents are vaccinated at younger ages,” Dr. Vadaparampil previously told SurvivorNet. “Their immune response is better, and they are less likely to have been exposed to the virus. Also, two doses are required if the vaccine series is started at age 14 or before, compared to three doses required after that age. Thus, waiting for a child to be older, may lead to missed opportunity to be maximally protected.”

So why are people hesitant to protect themselves and their children? One reason may be that there is a myth that that the HPV vaccine can cause autism.

Don’t Be Swayed by Myths: The HPV Vaccine Is Completely Safe

“The HPV vaccines do not cause autism, there’s always a risk of some vaccine-related side effects … local site injection pain, some redness, some swelling,” says Dr. Jessica Geiger, a medical oncologist at Cleveland Clinic Cancer Center. “There are no syndromes such as autism or other neurologic symptoms that have been linked to the HPV vaccines.”

Dr. Geiger also wants people to remember that, although you might not want to think about it, your children will likely participate in sexual activities at some point in their lives. Refusing to vaccinate your children denies them available protection from HPV-linked diseases, and that should be more important than not wanting to think about your kids ever having sex.

“The fact is that the majority of us are going to participate in sexual activity at some point in our lives,” Dr. Geiger said. “It’s unreasonable to think that just because your child isn’t engaging in sexual activity now that they won’t later in life.”

Everything You Should Know About The HPV Vaccine Why the HPV Vaccine Is So Important In Preventing Cancer HPV & Cancer Risk: The Basics
NOW
PLAYING
My Manicure Resulted In Cancer Diagnosis Says California Woman, 50; The Cut That Would Not Heal
NOW
PLAYING
Joyous San Francisco Woman, 44, Gets Second Chance At Life After Two Cancers Diagnoses, Successful IVF
NOW
PLAYING
Cool & Dashing As Ever, Michael Douglas, 78, Says Talking About HPV-Related Cancers Is The Only Way To Spread The Word
NOW
PLAYING
You Can Now Buy Top Gun Star's Val Kilmer's Personally Crafted Scrapbooks For Sale, His 'Most Private And Intimate Work To Date'
NOW
PLAYING
Pulling For Val Kilmer, 62, As He is Forced To Pull Out Of 'Willow' Film Role Amid Health Issues After Cancer
NOW
PLAYING
A Reminder About HPV-Linked Cancers From Survivor & 'Desperate Housewives' Actress Marcia Cross